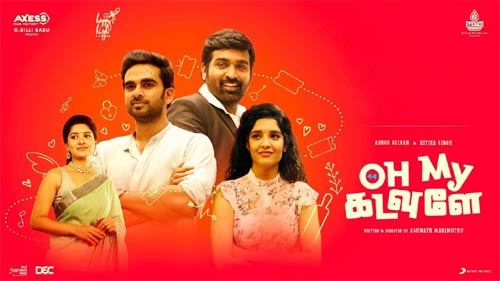 So, continuing the series of reviewing movies and shows during the lockdown period, our today’s pick is the hit Tamil film Oh My Kadavule. The film is available on Zee5 and let’s see how it is.

Arjun(Ashok Selvan) and Anu(Ritika Singh) are childhood friends who marry each other. But within just a short time, the couple starts facing troubles as Arjun does not have romantic feelings for Anu and is also fed up with working with his inlaws. The couple fight and files for divorce. In the court, Anu faints suddenly and in this gap, Arjun encounters a lawyer(Vijay Sethupathi) who is actually God(Kadavule) in disguise. After hearing about Arjun’s problems, the Kadavule gives him another chance to go back to his past and correct his mistakes and choose a better partner in the form of Meera(Vani Bhojan). What will Arjun do now? Will he woo Meera and start a new life? or resurrect his married life? That forms the story.

The film’s theme itself is quite unique as has something very novel to say. The base is a love story but the way it is conceived, credit should go to director Arjun Marimuthu. His narration is what makes things click in this beautiful love story that is filled with humor and emotions.

Ashok Selvan is amazing in the film and is a natural actor. He does supremely well in all the departments and carries the film on his shoulders. He is exceptional in the lift scene where he vents his anger on his wife Ritika Singh. Ashok is a gifted actor and he proves it with this film. Ritika Singh is good in her role but it is Vani Bhojan who is quite impressive as Meera. She has an endearing personality and the director has showcased her in a beautiful manner.

Vijay Sethupathi as Kadavule is superb in his brief role. All the scenes with him, Ashok Selvan and Ramesh Tilak are hilarious and create good fun. The first half is quite engaging with nice humor. The music, BGM, and camerawork are top-notch in the film. The comedy punch lines and dialogues need a special mention.

After a solid first half, things become a bit slow in the second half. Though the love story unfolds nicely, the scenes are a bit predictable and routine. Also, the manner in which Ritika’s character is shown does not have much to say. Her side of romance should have a lot of depth to make the drama even more engaging.

Overall, Oh My Kadvule is a breezy romantic comedy that is narrated in a beautiful manner. Top-notch performances, crisp narration and interesting backdrop are the main assets of this film. The film was lauded by Mahesh Babu and is now being remade in Telugu. Barring the slightly slow second half, this film ends as a good fun watch this lockdown period. Go for it.