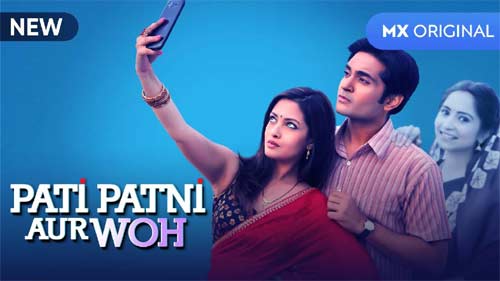 So, continuing the series of reviewing movies and shows during the lockdown period, our today’s pick is the Hindi web series Pati Patni aur Woh. The series is available on MX Player for free. Let’s see how it is.

The story is set in Benaras and is about Mohan(Anant Vidhat) who loses his wife Surabhi(Vinny Arora). But the catch here is that Surabhi’s soul is visible to Mohan and can even speak to him. One fine day, Surabhi takes a promise from Mohan to get married soon. So, paying heed to his wife’s wish, Mohan marries a girl named Rihm Jhim(Riya Sen) without even seeing her. On the first night of his marriage, both Mohan and Surabhi get shocked to see Rih Jhim’s beauty. While Mohan gets super excited, Surabhi starts feeling jealous of Mohan’s new wife. The rest of the story is as to how Mohan manages his current and late wife.

Anant Vdihat, who played a good role in Salman Khan’s Sultan gets the main lead and he does quite well in his role who is stuck in between two wives. Vinny Arora is also very good as the nagging wife. But it is Riya Sen who steals the show with her act. She looks glamorous and also plays a very good role and proves that she is just not a pretty face and can act well too.

The story of the series is very interesting and the jealousy factor has been executed well between the two wives. The small town setup and the way basic emotions play a big part in life have been executed well. The visuals are very good and dialogues need a special mention. The comedy angle in a few episodes is also good.

After starting the series on a superb note in the first two episodes, things fall flat in the latter part of the show. The logic goes for a big toss as the director brings in so many silly situations featuring the soul that it is hard to believe. Once this is done, the drama looks forced and emotions become artificial. The character justification is not done properly but the makers end the show well in the last episode keeping it open for season two.

Overall, Pati Patni Aur Woh is a family drama that has a very good premise. The performances are neat and the visuals are also appealing. But from the third episode, things go for a toss as the narration becomes bland and scenes are over the top. All those who like small-town comedies can give this series a shot but there is nothing new in it.