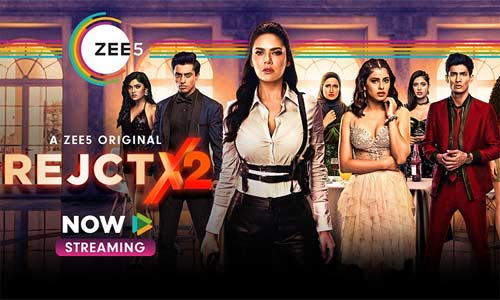 So, continuing the series of reviewing movies and shows during the lockdown period, our today’s pick is the second season of the Zee 5 original Rejctx. Let’s now see how it is.

Rejctx is about a group of rich kids at a private school in Singapore. After the suspenseful end of the first season where a student Anushka(KubraSait) gets killed, the second season starts with one of the other students, Aarav (Ahmed Masi Wali) trying to kill his father. He returns to school for a new semester and falls in love with Kiara(Anisha Victor). In all this, officer Rene (Esha Gupta) is assigned to investigate the death of Anushka. Who is the killer? What are the rich students up to? That forms the rest of the story?

Eesha Gupta plays the glamorous cop quite well. The series is filled with a lot of skin show and romance that will be liked by the younger generation. The whole murder set up also looks good and the way it is ended through a suspenseful last episode has-been set well in the second season. The cinematography by Himanshu Dubey has some great visuals. Editing by Arjun Srivastava was also quite good. The initial episodes with Eesha Gupta’s entry and she dealing with the rich kids is also shown well. The whole series is quite glossy and showcases how rich kids go about their free life in such schools.

The writing of the second season is quite weak. There are many scenes that are written just for the sake of suspense and do not have any weight in it. Eesha Gupta’s role looks a bit over the top in the way it speaks. The so-called drama is missing in the series as most of the concentration has gone on the making and look of the series.

This series also has songs which a total bore. Not one song from the show clicks. So much was said about the first season that it lacked spice but noted director Goldie Bhel did not correct his mistake here too and missed out on the drama big time. The essence and charm that a sequel requires are totally missing here.

Overall, Rejctx is a Hindi web series that has glitz and glamor with a dose of suspense. The first season was panned for silly narration and the same continues with the second season as well. This series will be liked by the teenage school going kids because of the glossy atmosphere but ends up as a boring watch for others as the key drama and emotions are missing.