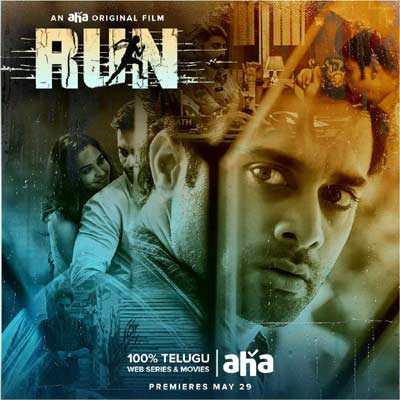 So, continuing the series of reviewing movies and shows during the lockdown period, our today’s pick is the AHA original Telugu film Run. Directed by Lakhsmikanth Chenna, let’s see how it is.

Sandeep(Navdeep) and Shruthi(Poojita Ponnada) are a couple who lead a happy life. On their marriage anniversary, Sandeep promises Shruthi to take her out for lunch. But suddenly, he gets a call that Shruthi has passed away. He rushes back home and cops frame him in the murder of his wife. Upset with this, he escapes from the situation and tries to crack the case. What’s the whole story behind this murder forms the crux of this film.

Navdeep is the main highlight of the film and does well as an innocent husband. The film runs on him and as the film progresses, he does well in his layered character. Navdeep is good at the climax of the film. Poojita looks cute as Navdeep’s wife. Bigg Boss fame Amit gets a good role and does quite well in it. Bhanu Sri, Shafi, and other supporting cast do well.

It was good to see actor Venkat after a long time on screen. He, in the role of a cop, looks fit and does well with his screen presence. The production values of the film are pretty good and special mention to BGM which is amazing. The way the story is established during the start looks good. Some twists and the way they are brought in are also neat.

When you choose a film that relies on psychological aspects, one needs to be really careful. Director Lakshmikanth Chenna starts the story well, unleashes the twists also neatly, but he did not explain the back story of Navdeep in a better way. The last fifteen minutes that are key to any film are rushed as the pre-climax and climax are a bit of a letdown. The dubbing is horrible and makes many scenes look over the top.

There was also no need to wrap the film in one and a half hours spoiling the mood. There are certain logics like key supporting cast helping the main lead should have been cleared well. This brings down the proceedings unconvincingly and the climax is kept open and that also looks odd.

Overall, Run is a film that a good premise, superb performance by Navdeep, and starts off quite well. But the rushed up narration in the last twenty minutes and the dull ending makes things difficult for the audience. If you are okay with this, give this film a shot during this lockdown but be ready as there is nothing new or special that will be showcased here.