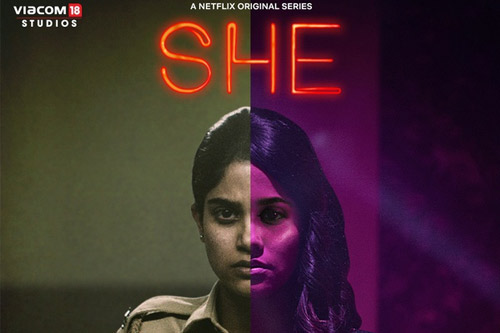 So, continuing the series of reviewing movies and shows during the lockdown period, our today’s pick is the Hindi web series SHE. This seven-episode series is created by star director Imtiaz Ali and has Aaditi Pohankar and Vijay Varma in lead roles. It is now available on Netflix.

The series is about a middle-class police constable named Bhumika(Aaditi Pohankar) who is sent as an undercover cop to bust a drug racket which is managed by an underworld don in Mumbai. The twist here is that Bhumika has to get physically involved with several henchmen before nabbing the don. How does she manage all this is the story.

The performance of Aaditi Phankar will shock you completely. She is so venerable as the middle-class cop and shows her beast side when she goes undercover. The whole process of her entering the gang as a sex worker is shown thrillingly. Vijay Varma as the Hyderabadi speaking gangster is also great. His scenes with Aaditi are intriguing. The twist at the end of every episode is also good. But the best part is the climax of the series which will leave you shocked.

Overall, She is one of those crime thrillers which has some great performances coupled with good thrills. The twists, narration, and taking are gripping. The series is an adult only series and has some bold scenes. Apart from that, this web series makes for a gripping watch this lockdown.