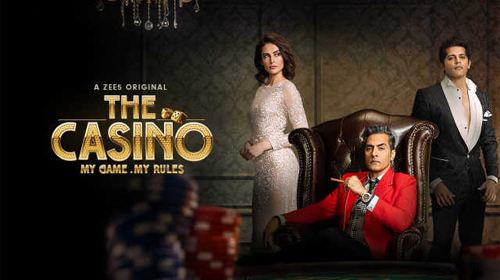 So, continuing the series of reviewing movies and shows during the lockdown period, our today’s pick is the Hindi web series The Casino. The series is available on Zee5 and let’s see how it is.

Marwah (Sudhanshu Pandey) is the owner of a rich Nepal based Casino which is in deep problems. On the other hand, Rihana (Mandana Karimi) is a famous dancer in the Casino who tries to woo Marwah for money. All this is not liked by Marwah’s son, Vicky Marwah (Karanvir Bohra) who now wants to own the Casino at any cost. But Rihana is a bigger player and lures both father and dad in the trap. What happens next and who will win this cash-rich Casino is the story.

The whole game of power and how father, son, mistress are trying to be on top of their game is set up well. All this is established well in the first two episodes. A very young Sudhanshu Pandey does not look anywhere close to a dad but plays his role well. But the series is about Mandana Karimi who gets a meaty role. She does well in all departments and holds the show well.

The twists in the series keep you connected most of the time. The series is mostly about money and how one can to any extent for it has been shown well. Dialogues have bee quite well and Karanvir Bohra does well in a crucial role. The BGM and camerawork are good and the art department needs a special mention.

The story is about the Casino but we do not get to see how it is run and why people are power hungry for it. This aspect should have been shown in a better manner. Though the star cast does okay, some more experienced actors could have made a lot of difference. In the middle episodes, there are many backstories and crime angle which misleads the plot and things become boring. Also, the ending is kept open to continue it for the next season which disappoints. The emotions should have been a bit stronger to make things look better.

Overall, The Casino has a very interesting setup and is also narrated well in the beginning episodes. The power-hungry politics in the family looks nice but the middle episode deviates from the actual plot and spoils the mood of the audience. All those who like witty and unabashed crime dramas can give this series a shot but the emotional angle makes it a dull watch for others.