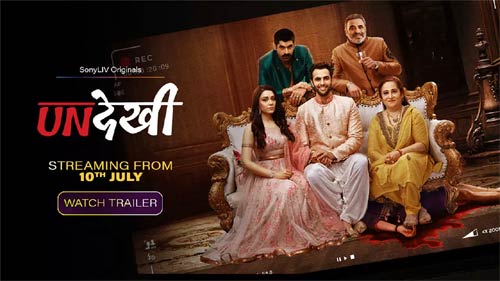 So, continuing the series of reviewing movies and shows during the lockdown period, our today’s pick is the Hindi web series Undekhi. The series is available on Sony Liv and let’s see how it is.

Daman Atwal (Ankur Rathee) is all set to marry Teji Grewal (Anchal Singh)in a big fat wedding in Manali. Daman’s uncle and cousin run the town with their bad deeds which he is unaware of. A brutal murder is committed in the wedding shocking many. This wedding is captured by one of the photographers Rishi (Abhishek Chauhan)who wants to report this to the media and cops. This starts a new game of chaos. Will the cameraman report the murder going against the big guns of the city. What will Daman do in all this? That forms the rest of the story.

Dibyendu Bhattacharya is getting some solid roles with each passing day. He plays a ruthless DSP in the series and is the biggest highlight. The way he croons songs in his serious investigation and manages to deal with some of the biggest guns in his own way has been showcased superbly the actor. The way the murder happens, and how bigwigs in the crime-filled areas of north India showcase their power has been showcased superbly. The series has a solid set up and gives good engaging moments in every episode. The scenes between Rinku and DSP are solid and give a different perspective to the show. All the characters have been nicely cast and they do a solid job in the show. From the beginning, the makers do not waste much time to establish the story and make it engaging. The story is simple but the narration, BGM, and performances make it gripping.

Some of the subplots shown in the series were not needed at all. Too much attention is given to Daman and his relationship with his fiance. After the first few episodes, the pace of the show drops down in a big way. The show could have been wrapped up in eight episodes to make things crisper.

Overall, Undekhi is a gritty web series that has a superb premise. The small-town crime setup, power game, realistic performances, and gripping narration makes things very interesting for the audience. Barring a few repetitive scenes and slow pace in the 6th and 7th episodes, this series ends up as a good engaging watch during this lockdown. Go for it.