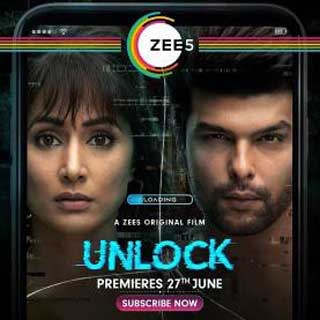 So, continuing the series of reviewing movies and shows during the lockdown period, our today’s pick is the Hindi film Unlock The Haunted App. The film is available on Zee5 and let’s see how it is.

Suhani(Hina Khan) is deeply in love with Amar(Kushal Tandon) but like in every story, the boy likes someone else. Amar is in love with Suhani’s roommate Riddhi. One fine day, Amar’s friend, tells Suhani about an APP which fulfills the darkest of the secrets. So, Suhani gets on that APP in order to win Amar. But to her shock, there are various twists and turns that Subani’s story takes from the time she downloads it. What is that and how did Suhani survive all this is the story.

Hina Khan dominates the proceedings completely. She does not shy away from showcasing herself in a glamorous way when needed and the best part is when the film gets serious. She showcases all sorts of emotions through her eyes beautifully. The story idea is good and Kushal Tandon is decent in his role. The proceedings start off well and characters are introduced nicely. The production values are also good and so was the BGM. Vishnu Panicker’s cinematography is very good.

The story looks ok and is fictional but the narration is horrible. The director takes things for granted and throws so many over the top situations that you start getting a headache. The writing is water-thin and none of the scenes post the first half an hour makes any sense. The APP assigns you certain tasks that one needs to perform if their wish has to be fulfilled. But all these tasks are so silly and horrible. The horror scenes also do not create much impact and bore you completely. Also, the dialogues are cheesy and logic goes for a toss in many scenes.

Overall, Unlock is a thriller that has an interesting plot but the narration goes haywire. Except for Hina Khan’s sincere performance, this film has nothing to offer with its thrills or twists and ends as a horrible watch. Stay away from this one.