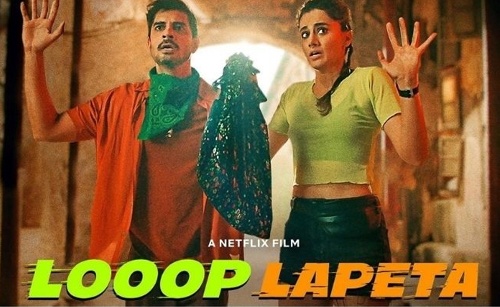 Taapsee is back with yet another film in Hindi. Titled Looop Lapeta, this film is the official remake of the German thriller Run Lola Run. The film is now streaming on Netflix and let’s see how it is.

The story is set in Goa. Savi(Taapsee) is an ex-athlete who is living with her boyfriend Satya(Tahir Raj Bhasin). One fine day, Satya gets a quick deal to deliver a parcel. He does so and the big amount he gets back is accidentally lost by him. This causes mayhem as Satya’s boss gives him just 80 minutes to set things right. A hopeless Satya calls Savi to help him. In all this, there is also a time loop concept. What is it? How is it set up? and how will it help the couple is the basic story.

Taapsee and Tahir Raj Bhasin are two seasoned actors and are the only solace of the film. They deliver a wacky performance as their roles are always on the run. Taapsee runs the show and is good for the most part.

The production values, color tone, and camerawork need a special mention as they give a special edge to the film. The second half where the time loop is introduced has some fun moments and the thrills are decent.

Looop Lapeta is the official remake of the German thriller Run Lola Run and is nowhere close to the original. The director Aakash Bhatia tries something new with the screenplay and adds multiple layers in the narration. Though it looks new, for a common audience, it is hard to understand what is happening in the film.

The film’s first half is filled with such over-the-top elements and only by the break time, do you understand the actual intent of the story. The manner in which the lead characters behave during this time also looks weird. Also, for a thriller, the runtime of over 14 minutes feels so long.

As said earlier, the film is high on technical aspects. The BGM is very good and the production design and the way Goa is showcased look different. Dialogues are quirky and so were the lyrics in the songs. Coming to the director Aakash, he has done a poor job with the film. His idea of a linear screenplay is good and looks fresh at the onset but the film starts on a confusing note and ends in a predictable manner.

On the whole. Looop Lapeta is the official remake of the German thriller Run Lola Run. The setup, production design, and Taapsee’s role look good. But the haphazard screenplay, the unclear concept of time loop confuses the audience and makes this film a boring watch.