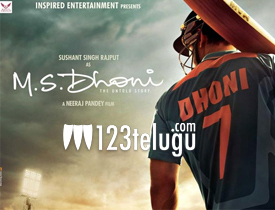 M S Dhoni is one of the most awaited films in the recent past. After a huge round of promotions, this biopic has finally hit the screens today. Let’s see how it is.

Everyone knows the story of M S Dhoni and what he has achieved for India in cricket. But this film is more about how he started liking the game and pursued it as a career. The story is all about his struggles of getting selected into the Indian team and what all troubles he faced in becoming a star and won us the prestigious 2011 cricket world cup.

Sushanth Singh Rajput is undoubtedly the heart and soul of the film. The young hero performs so well that you will feel as if Dhoni himself has acted in his biopic. The way Sushanth has mastered the cricketing skills and imitated Dhoni completely in the game is just outstanding. Not only with the appearance, Sushanth gives an emotional performance and holds you onto the screen right until the end.

Disha Patani is apt as Dhoni’s girlfriend. All her love scenes with Sushanth have been etched wonderfully. Anupam Kher brings a lot of depth to the proceedings as Dhoni’s dad. Bhoomika Chawla is superb as Dhoni’s sister. The first half of the film moves on an emotional note and showcases what problems Dhoni faced during his growing up years as a cricketer.

Special mention should go to the VFX team for showcasing the grounds, cricket matches, and Sushanth in such a splendid way. The two love stories that have been shown are moving and have been narrated quite well. The way 2011 world cup final has been set for the climax of the film is very interesting.

One of the biggest minus points for at least some audience will be the lack of cricket controversies or crunch situations in Dhoni’s captaincy which have been skipped in the film. Certain scenes like Dhoni becoming the Indian captain and various other important issues that took place after Dhoni’s entry have completely been ignored.

The makers have gone in so detail during the first half that one gets a feel that there is more coming in the second half. Instead, the makers rush through the second part and wrap the film up with the world cup final. The length of the film is also very long. One needs to adjust to the three hours, five-minute duration to sit through the emotional proceedings.

Production values of the film are just awesome. Things have been kept so realistic keeping the humble background of Dhoni in mind. Dialogues and screenplay are a huge plus as the film moves on a emotional journey which many do not know about the star. Music is also very good but the background score takes things to another level.

Coming to the director Neeraj Pandey, he has done a very good job with the film. Staying true to the title, he has narrated the untold truths about Dhoni’s rise to the top in a splendid way. Had he added some more masala and shortened the run time, the output would have been staggering.

M S Dhoni is one name which will be remembered in India for the rest of our lives. His rise to fame and the actual struggles he faced to get where he is now is an inspiration in itself. So when you get to see such stories on screen and when actors like Sushanth Singh Rajput plays Dhoni in a splendid way, it gets even more interesting. If you ignore the lengthy run time and want to see the emotional side of Dhoni’s life this film is definitely worth a watch this weekend.