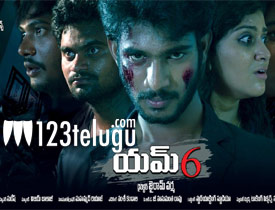 Continuing the trend of low budget films, yet another movie which was released today is M6. Directed by Jayram Varma, let’s see how the film turns out to be.

Nikhil(Dhruva) and Neha(Aswini) are a couple who decide to go to a rocking party which is set up in a building called M6. Neha reaches the place before Nithin and starts enjoying herself. But to her shock, someone tries to kill her all of a sudden. Who are these persons? Why are they after Neha? and how does Nikhil manage to save Neha? That forms the rest of the story.

Even though Dhruva is a bit weak in the looks department, performance wise, he has done a very good job. The scenes in which he saves the heroine and his performance in the climax is pretty impressive.

Heroine Aswini was okay in her role but she needs to improve with her expressions. The guy who played the cousin’s role did a superb job in his character. Two small-time comedians who get stuck in the house elevated comedy here and there.

The film has a lot of good scope for comedy but the director failed to utilize it. His narration is not proper as many horror and comedy scenes do not create the desired effect.

The key horror scenes which create comedy have not been established well in the second half and this is where the film goes for a toss. Logic is missing in the film as too many cinematic liberties have been taken. Apart from this, the screenplay is also not that gripping and spoils the mood of the audience.

Production values of the film are so-so. Camera work is horrible as the film has a shaky and weird feel throughout. Editing is horrendous as many scenes could have been deleted before the final copy came out. Music by Vijay Balaji is good but his background score is way too loud. Coming to the director Jayram Varma, he has failed in his execution as the film is not that gripping and does not create good comedy as well.

On the whole, M6 is one film which does not create either horror or comedy in a gripping manner. The film has dull narration and misses logic in every which way. Just stay away from this one and revisit some of the old horror comedies to make your mood lighter.