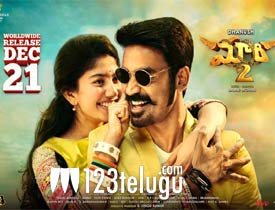 The sequel to Dhanush’s Maari, Maari 2 has hit the screens today with a very low buzz. Let’s see how it is.

As shown in the first part, Maari is an undisputed don in his area. He is best friends with Jagan and always obstructs drug deals in his gang. But this does not go well with rival gangs who join hands with Jagan’s brother and try to continue the business. This is also the time when a criminal named Bijju tries to kill Maari. Who is this Bijju? What is his animosity with Maari? and where does Sai Pallavi feature in this setup? That forms the rest of the story.

Dhanush continues where he left in the first part. He as the dreaded don is the highlight of the film. His swag and dialogue delivery add an edge to the film. His six pack show is another special attraction in the film.

Sai Pallavi is superb in her loud auto driver’s role. Her mass avatar is a treat on screen and the manner in which she teases Dhanush is top notch and brings good relief. The chemistry between the lead pair is good.

Varalkshmi Sarath Kumar is getting better with each film and has done a key role with a lot of aplomb. The actor who played Dhanush’s friend was also good.

The execution by director Balaji Mohan is not up to the mark. His story setup is good but he did not elevate the characters enough. There is not much conflict point between the hero and villain and this makes the film weak in many areas and disinterests the audience.

There are many scenes which look way too cinematic. Adding to this, the love track in the film has been dragged way too much in certain areas even though it looks interesting. There is too much of Tamil flavor in the film and this can be a put off for the Telugu audience.

Camerawork by Om Prakash is very good. Editing by Prasanna is neat. Production values by Dhanush are just about okay. Music is disappointing but the BGM by Yuvan was good. As said earlier, director Balaji Mohan did not make use of Dhanush’s screen presence and made the film a bit dull in many places. The Telugu dubbing was very bad.

On the whole, Maari 2 does not create the effect which the first part did. Sai Pallavi and Dhanush’s comical romance evokes some fun but the rest of the proceedings are dull and routine. The film can be given a shot for Dhanush’s mass appeal and some thrills but there is nothing new you will see here. So, go in well prepared.