Review : Mad – Dragged to no extent 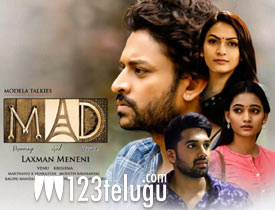 Continuing the trend of reviewing low-budget films, today’s pick is Mad which is directed by Laxman Meneni. Let’s see how it is.

Maddy(Madhav Chilukuri) is a playboy by nature. On the other hand, Madhuri(Spandana) is a girl who believes in true love. What happens when people with such different ideologies get married. What problems do they face? and what are the roles of Rajat Raghav and Swetha Varma in this story is the whole film all about?

Madhav Chilukuri, who plays the main lead has done a very good job in his role. He was quite good in the first half and in all his scenes with the heroine, Madhav has done so well. Emotions-wise, Madhav was quite good. Yet another actor, Rajat was also good in his limited role and had good timing.

Heroine Spandana also does well and looked good in her role. The actor who did the role of a father was also impressive. The rest of the supporting cast was also okay. A few emotional dialogues related to marriage were good.

As the film is about modern-day marriages, the director has gone all out and way too much romance which looks a bit odd. The basic conflict is not elevated well by the director as many scenes deviate from the story unnecessarily.

The lead pair has contrasting personalities and this was enough for the director to create solid conflict points but he failed to do so and made the film boring. Also, the supporting cast and the key padding artists looked weak in the film. The basic emotion of trouble in marriage is clearly missing in the film.

On the whole, is a modern-day drama that is based on troubled marriages. Though the story looks okay, the execution is below par and has way too many unwanted scenes making this film a bore-fest this weekend.