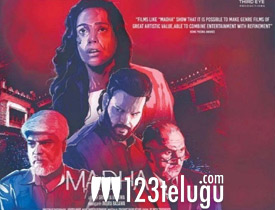 Madha is a film that has been won several awards at various film festivals and has hit the screens after a lot of effort today. Let’s see how the film is.

Nisha(Trishna Mukherjee) is an orphan who falls in love with Arjun(Rahul Venkat). But to her bad luck, Arjun cheats Nisha and frames her as a mentally ill person. Nisha is taken to an asylum and is treated badly with drug abuse. Who is doing this? What is their motive? Why have they targetted Nisha? and how does she escape from there is the whole story?

One of the biggest assets of the film is the entire premise. Director Sri Vidya creates a unique world for her story which looks different and at the same time is realistic. Her shot-making, the way she unleashes the story at a neat pace and extracts superb performances is quite good.

Sri Vidya succeeds in setting the mood right with multiple threads running at the same time which are connected at the end. These threads create a curiosity factor as to what is going on. The manner in which she shows the girl going through so much trouble makes us feel pity for her. All this has been nicely elevated by the director.

Coming to the performances, lead heroine, Trishna Mukherjee does an awesome job in her role. She had a very emotional and trouble-filled character to portray and she did it with aplomb. All her scenes where she gets treated badly are superb and nicely emoted by Trishna. She is surely a good find.

Hero Arjun Venkat was good in his important role. Anish Kuruvilla is becoming a better actor with each passing day. After Kanulu Kanulu Dochayante, he gets another key role and does supremely well. The production design needs a special mention as the set work and art direction is superb.

The film is not for the regular audience who look for basic thrills that a routine thriller showcases. Even though the film is one hour 45 minutes, it feels a bit slow in a few areas. Especially at the beginning of the second half. Too many scenes are showcased featuring the heroine going through torcher.

Once you see the film, you could understand why has it won so many awards as it is technically brilliant. The camerawork is amazing and showcases the proceedings in a unique manner. Especially, all the visuals in the asylum are too good. Naresh Kumaran’s music score is top-notch and his BGM is even better. The dialogues, costumes, and the screenplay are pretty good. The aesthetics used look quite real in the film.

Coming to the director Sri Vidya, she is an amazing find and is a talent to watch out for. Her writing is strong as every character has a purpose. She extracts solid performances from her actors and does not rush through any of the scenes and makes them register nicely on the minds of the audience. The different twists that she unleashes at the end are also good. After a long time, we get to see a filmmaker who has a strong grip on every craft of the film.

On the whole, Madha is a unique and dark thriller with an interesting premise. Trishna Mukherjee’s performance, twists and turns in the second half and crisp runtime are huge assets. As the film has a dark theme and is devoid of commercial aspects, it will have its shortcomings at the box office. But debutante director Sri Vidya is the one to watch out for her in the future as she makes us engrossed into her universe once you start watching the film. Give it a shot and you won’t regret it.