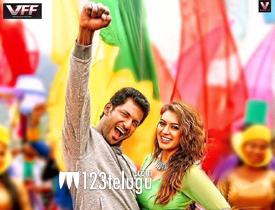 Tamil hit film Ambala, starring Vishal and Hansika, is now being brought to us in Telugu as Maga Maharaju. Sundar C, who made a mark with the horror comedy ‘Chandrakala’, has directed this flick which has opened in 474 screens allover. Let’s now see how it is.

Krishna (Vishal) is a young business man who lives with his single mother. One fine day, he comes to know about his father(Prabhu) and sets out to find him. After searching for a while, he finally meets his dad and finds out that he also has two younger brothers.

Twist in the tale arises when his father asks Krishna to reunite him with his three lost sisters. Rest of the story is about how Krishna manages to reunite the entire family. Where does Maaya(hansika) feature in all this set up? Watch the movie to find out.

One of the biggest plus of this dubbing flick is the familiar star cast. Vishal is good and plays the sheet anchor’s role quite well. Comedy scenes between Vaibhav and Satish will evoke a few laughs.

Milk beauty Hansika has once again played a glamorous role to entertain the audience. Star comedian Santhanam has done a great job and all his scenes during the climax are hilarious.

Senior actresses Ramya Krishna, Aishwarya and Kiran Rathode have done a decent job in their supporting roles. Poonam Bajwa sizzled in an item song which looked quite racy on screen.

The plot of the film and narration are the major drawbacks of this family drama. The movie falls flat with predictable scenes and offers nothing new as far the story is concerned.

Even the songs and fights designed are also below par. The characterization of villain is also not up to the mark and does not create the necessary effect.

There is a lot of drag in the narration and in storytelling. There is also a very old flavour to the movie.

Cinematographer Gopi Amarnath has done well in showcasing the locations quite nicely. Production values of the film are good and all the songs have been shot lavishly. Dialogues written by Shasank Vennelakanti are decent. Music by Hip Hop Thamiza is not at its best. Editing is also below par as the movie seemed quite lengthy.

After scoring a hit with ‘Pooja’, Vishal disappoints the audience with Maga Maharaju. Routine story and a predictable set up are basic drawbacks of this film. Other than Santhanam’s comedy and Hansika’s glamour, this film has nothing much to offer for viewers.
​
123telugu.com Rating : 2.5/5
Reviewed by 123telugu Team