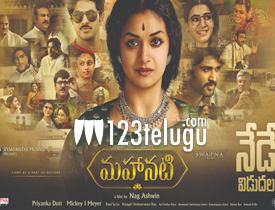 The wait is finally over as the much-awaited biopic of Savitri, Mahanati has finally hit the screens today. Let’s see whether the film lives up to all its expectations or not.

Madhuravani(Samantha) is a journalist in Madras who is assigned the duty of covering Savitri’s case after the actress ends up in a coma. Madhuravani decides to go neck deep into Savitri’s life and starts penning her life story from all the sources she meets. Rest of the story is showcased in a flashback mode from where Savitri played by Keerty Suresh becomes this great actress and how her life ends up in all kinds of problems after she falls in love with Gemini Ganesan(Dulquer Salman).

Firstly, credit should go to director Nag Ashwin for thinking of making a biopic on the life of an actress who was very famous in Telugu film history. What makes this film interesting is that Nag Ashwin does not shy away from showcasing Savitri’s dark secrets and narrates exactly as to what happened in the life of one of the greatest actresses Telugu cinema has ever seen.

Keerthy Suresh gets the role of a lifetime and boy she delivers the knock out punch. She will never get such a tailor-made role in her career and she leads from the front in terms of performance. The innocence of Savitri, her rise to stardom and her addiction to alcohol, Keerthy has portrayed all the emotions with aplomb. Keerthy is especially superb in the second half and delivers her best in all the climax scenes of the film.

Samantha plays the sheet anchor’s role to perfection. The way she has dubbed for her role and emotes during the climax shows volumes of her talent. All her scenes with Vijay Devarakonda have been executed quite well. The small comic touch and Sam’s chemistry with Vijay is excellent. Rajendra Prasad gets a good supporting role and brings a lot of depth to the film.

The first half is quite fun as the growth of Savitri as an actress and her love story with Gemini Ganesan has been showcased in a very interesting manner. Whereas the second half shows all the pain and problems that Savitri went through in her life. This part is filled with a lot of drama. Mohan Babu, Krish, Naga Chaitanya, Prakash Raj appear in cameos and sustain an interest factor in the film.

Dulquer Salman is an apt choice to play Gemini Ganesan. The star actor nicely gels into the film and the way he portrays his role with negative touch is quite good. All the scenes which re-create the hit songs and scenes from Savitri’s famous movies look superb on screen as Keerthy Suresh looks like a replica of Savitri.

After a fun first half, the second half gets a bit serious as all the problems of Savitri are showcased. This is the time that the film becomes a tad slow.

All those who know about Savitri will connect to the film well but the others might find this film like yet another tale of an actress whose success streak comes down crashing after making some of the bad choices in life.

Production values of the film are top notch as the bygone era has been re-created in a spectacular manner. Be it the studios of Madras or the costumes in which Savitri is showcased, everything looks superb. Cameraman Dani Sanchez-Lopez should be given full credit for his work as he has shot the different time zones in a realistic manner. Especially, Samantha and Vijay Devarakonda’s 80’s set up looks quite good.

Mickey J Meyer’s music is quite pleasing as the songs nicely sit in the narrative. But his background score is even better as it gives a lot of depth to the film. Dialogues are neat and quite emotional in many areas. Editing is decent but certain bits in the childhood episode of Savitri could have been edited out. Special credit should go to the costumes and makeup department as they have done a stunning job in making Keerthy look exactly like Savitri.

Coming to the director Nag Ashwin, he has done an amazing job with the biopic. He stays true to the genre and does not add any unnecessary elements to the film. Nag Ashwin manages to neatly showcase the dark side of Savitri without hesitating a bit. This is where the film clicks and the biopic becomes interesting. The young director scores heavily as he showcases every aspect of Savitri’s life in an interesting manner without making it look like an art film.

On the whole, Mahanati is a fitting tribute to the legendary actress Savitri. The rise and downfall of Telugu cinema’s most famous actress have been shown in a very effective manner. Keerty Suresh leads from the front and pours life into the character of Savitri making things quite interesting. As the film is of the biopic genre, there is a lot of drama and things get narrated in a slow pace and this might not go well with certain section of the audience who do not know much about Savitri. If you ignore this aspect, Mahanati moves you emotionally in many areas and is a film which should not be missed as biopics like these are rarely made in Telugu cinema.