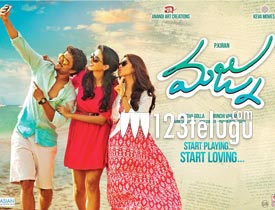 Natural star Nani is back with yet another interesting film Majnu. The youthful love story which is directed by Virinchi Varma has hit the screens today. Let’s see whether Nani continues his winning streak or not.

Aditya(Nani) is an easy going youth who falls in love with Kiran(Anu Emanuel). He tries hard to woo her and finally manages to convince Kiran. When things seem to be going fine, a small problem leads the couple to break up with each other.

An upset Aditya lands in Hyderabad and moves on with his life. As time passes by, he starts liking Suma(Priya Shri) and reveals his tragic love story to her. Impressed by this Suma also falls flat for Aditya.

The twist in the tale arises when Aditya comes to know that Kiran is none other than Suma’s own cousin. What will Aditya do now ? How will he handle both his past and present ? Whom will he end up with finally? That forms the rest of the story.

It is no surprise that Nani is undoubtedly the heart and soul of the film. Majnu banks heavily on him and it is a cake walk for Nani who once again steals the show. He is superb as the lover boy and entertains throughout. Humour, grief, possessiveness, Nani shows all the emotions beautifully and holds the film completely. Right from the first frame, audience will own him and get connected through his role.

Anu Emanuel makes a decent debut and is very good in the first half. All her love scenes with Nani have been shown quite freshly. Vennela Kishore is hilarious in his role and lightens up the proceedings during the initial part of the second half.

The comedy that is generated through Nani’s one-liners and comedy punches are written well. The climax of the film has been handled well and showcased in an interesting way which ends the film in a very happy space.

Majnu has a very interesting twist but the way it has been showcased during the interval lacks clarity. Nani’s transformation to get back his old love, scenes like these should have been showcase even more convincingly.

Yet another debutante, Priya Sri is not convincing in her role. No fault of her, the director should have etched her role in a slightly better way. There is absolutely no novelty factor in the film as the proceedings after a point, become quite predictable.

Production values are top notch as the film looks quite rich. Credit should go to Gyanasekhar for his excellent camerawork. The way he has showcased Bheemavaram and the entire set up is awesome. Dialogues need a special mention as they are quite witty and suit the nature of the film. Music by Gopi Sunder is decent and sounds well with the visuals.

Coming to the director Virinchi Varma, he has done a decent job with the film. Even though he chooses a routine story, he manages to narrate it an entertaining way. Had he dealt with the triangular love story well, Majnu would have been an even better film.

Off late, the audience has taken a serious liking towards Nani and are loving all his performances and films. Staying true to his image, Nani gives a terrific performance in Majnu and is the major reason for everyone to watch this film. A breezy first half and happy climax are basic assets. If you ignore the routine storyline, Nani and team will make sure that Majnu will end up as a entertaining watch this weekend.