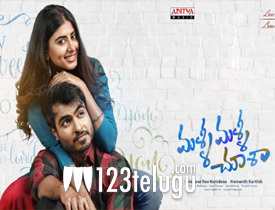 Malli Malli Choosya is a romantic entertainer which has hit the screens today. Let’s see how it is.

Gautam is an orphan who is brought by an army major in Vizag. He chances upon a book written by Swapna(Sapna Awasti) and starts reading it. As time passes by, he falls in love with the book and Swapna. Things become so serious that he decides to somehow meet her and comes to Hyderabad. Will Gautam meet Swapna? Will he be able to express his love to her? What happens to his love story? That forms the rest of the story.

Hero Anurag makes a good debut. His performance in the mass scenes, dances and in all the emotional scenes was pretty good. He never looked like he was acting for the first time anywhere in the film which is impressive. Senior actress, Annapurna was good in the role of an old lady from Telangana.

Ajay did a good job in the role of a major. Even though he had limited run time, he impressed with his dialogue delivery. Sapna Awasti was also good in her role. Kairavi was also neat in her supporting role. YouTube comedian Babloo also evoked decent laughs in the film.

One of the biggest drawbacks of the film is the age-old storyline. Dairy-based love stories have been many a time in the past and Malli Malli Choosya is no different. The basic narration of the film is quite slow and does not give that needed punch. There are way too many fights that were added unnecessarily.

Many scenes in the film have no basic flow and are disconnected from each other. There is not one scene that is novel as the film is filled with routine and outdated. The entire first half is used for just building characters and when it comes to the key second half, scenes are repeated many times making it a boring watch for the audience.

Music by Shravan Bhardwaj is good but his background score was disappointing. The camerawork of the film is quite good as it showcases the terrorist set up well in the film. Editing is a disaster and at least 15 minutes could have been edited out. Coming to the director Hemanth, he has done a pretty dull job with the film. His story is old and his narration is even older and dragged out.

On the whole, Malli Malli Choosya is a routine and outdated romantic drama which you might have seen many a time in the past. There is no novelty in the proceedings and except for some decent performances from the lead pair, this film fails to entertain this week. Skip it this weekend.