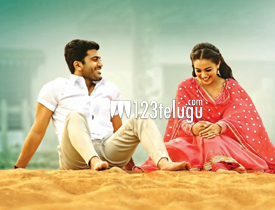 Young hero Sharwanand, has been associated with some meaningful films in the past. After the huge success of Run Raja Run, he is now back with a romantic entertainer, Malli Malli Idi Rani Roju, which also stars the super talented Nithya Menen. Directed by Kranthi Madhav, this film has hit the screens today. Let’s see how it is.

Raja Ram(Sharwananad) is an aspiring young athlete who lives with his single mother. During one of his sporting events, he comes across a burkha clad Muslim girl named Nazeera(Nithya Menen) and falls head over heels for her eyes. He chases her and eventually the couple fall in love with each other.

Twist in the tale arises when shocking incidents occur in both their lives and the couple get separated. What is that incident ? How did it change their life ? Will they ever meet each other again ? To know the answers to these questions, you need to watch the film on the big screen.

Story of the film is quite novel and deals with life after break ups. The way a mature relationship has been showcased is really wonderful. Sharwanand once again proves that he is an excellent actor. He is superb and dominates the entire first half with his endearing performance. The way he has carried out subtle emotions during the second half is amazing. He is spectacular in all the scenes involving his mother and has showcased immense maturity.

Nithya Menen walks away with the cake in this film. She had a lot of scope to showcase her talent in this film and has nailed it completely. Be it her performance as a college girl in the first half or as the emotional mother in the second, Nithya has balanced her act wonderfully. All the romantic scenes featuring Nithya and Sharwanand have been executed superbly. Chemistry between them is mind blowing and is the major attraction for the film.

While the first half is quite romantic and entertaining, the second half is emotional and moving. The actress who did Sharwanand’s mother’s role was also quite effective. Dialogues of the film are meaningful and will connect with the audience effectively. Tejaswi does a wonderful job in her supporting role.

All said and done, this film has its own de-merits. Pace of the movie is a bit slow and it takes a long time for the proceedings to wrap up. The regular popcorn entertainment which the B and C centre audience look for is completely missing in this film. This is a feel good film and will majorly be liked by niche and mature audience. Once the twist is revealed, the film gets predictable during the end.

Music of the film is quite good and all the songs have been placed wonderfully. Lyrics have a sufi flavor and are blended wonderfully into the songs. Background score is decent and so are the production values. Camerawork is excellent and showcases the film in a stunning light. The way Vizag and its surrounding areas have been shot looks quite realistic. Editing of the film is good but a few scenes during the second half could have been easily edited.

Director Kranthi Madhav stays true to his talent and weaves a wonderful love story around a loving couple. The way he has stuck to the script and narrated the plot with a lot of human emotions is wonderful. He showcases the Muslim- Hindu love story quite naturally and does not create any fuss about it.

On the whole, Malli Malli Idi Rani Roju is a feel good love story which stays within your heart. However, the slow paced narration and lack of entertainment will not go well with certain sections of the audience. Sharwananad and Nithya Menen’s mind blowing performance and the emotional content are basic plus points. All those who like coming of age love stories and do not mind the slow pace will definitely end up liking this film.