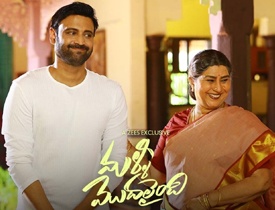 Malli Modalaindi, starring Sumanth Kumar and Naina Ganguly in the lead roles, is the first Telugu movie directed by Keerthi Kumar. The movie is now available to stream on ZEE5 OTT platform. Let’s check how it is.

Vikram (Sumanth) is a passionate chef who likes to live in his own space. His wife Nisha(Varshini Sounderajan) wants a divorce from him because of his self-centric character. They both get divorced and Vikram starts having feelings for the advocate Pavitra (Naina Ganguly), who helps Vikram’s wife get a divorce. Pavitra opens RESET, a company to help the divorcee to start life afresh. Vikram joins the company and tries to convey his feelings for her. Did he propose Pavitra? How did Pavitra react to Vikram’s behaviour? What happened next in their lives? To need answers you need to watch the movie.

Sumanth performs with ease as a clueless husband and gives his best. He looks cool. Varshini and Naina look beautiful and they also perform well. Vennela Kishore’s comedy is okay in some scenes.

The point the director wants to convey about life after the divorce is good. A few dialogues in the movie work out well. The visuals look okay and the music is also fine in some scenes.

Director wants us to know that one can start a love life even after divorce. The point is okay but he fails to narrate it in a good manner. The movie would have been a good family drama if the narration is good. Poor characterizations and boring scenes are the major drawbacks of the movie.

The director fails to get the most out of Suhasini and Manjula, even they have a good scope to perform. Writing some emotional scenes in connection with them might make Malli Modalaindi a feel-good movie. Music by Anup Rubens is not up to the mark in many scenes. If the director takes proper care of the screenplay and characterizations, the movie could have been a nice entertainer.

Director Keerthi Kumar’s concept is fine and he fails to make the movie an engaging family drama by writing poor characterizations and writing. Anup Rubens’ music is okay. Siva Kumar’s cinematography is nice and the production values are good. Editing by Praveen needs to be crisper.

On the whole, Malli Modalindi is a boring movie with improper characterizations and poor writing. Though the concept, lead pair’s performance are good, the movie goes off the track eventually and makes you bored for sure.