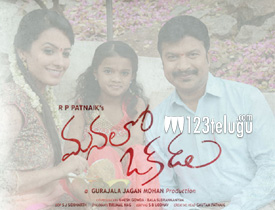 R P Patanaik’s Manalo Okadu was being promoted as a film which will reveal media’s wrong doings. Starring Anita as the female lead, this interesting film has hit the screens today. Let’s see how it is.

Krishna Murthy(RP Patnaik) is a very honest professor who leads a simple life with his wife(Anita). The twist in the tale arises when Krishna Murthy is suddenly shown on television as the bad guy who has molested his college student.

Shocked by this, Krishna Murthy tries hard to prove his innocence with the TV channel which telecasts all this. But to his bad luck, things become even worse for him from there on.

What kind of problems did Krishna Murthy face ? How did he come out of this mess and prove his innocence ? That forms the rest of the story.

Manalo Okadu is set up in a very natural premise. An honest professor and how is simple life turns upside down because of the negligence of the media is shown in a very interesting note. R P Patnaik succeeds more as a director than an actor here. The way he showcases the harsh realities of media and how they operate needs to be applauded.

Anita Hansnandani makes a very good comeback after a long time and is perfect in her role. She does a very good job in all the emotional scenes and gives ample support to Patnaik. Sai Kumar is effective as a media baron. Sreemukhi’s role is hard hitting and the young actress does well to hold the fort. The first half of the film is gripping and has good moments.

After nicely setting up the film during the first half, Patnaik loses ground during the second. The steam that is created during the initial phases of the first half, is slowly faded away. Films like these need to be crisper and to the point. But sadly, Manalo Okadu takes it own sweet time to take off and end.

RP’s approach towards his goal and the way he deals with tense situations are quite lethargic. The narration of the film takes a severe beating as the proceedings become quite slow and sidetrack the film. Even though the climax has a justification, it looks hurried up. Jaya Prakash Reddy’s role and an item song irritate you completely.

Production values and the entire set up is quite impressive. Music is just about okay and the editing department could have easily removed two songs. Screenplay by Patnaik is impressive during the first half but falters in the later part. Dialogues are hard hitting and the ones written aiming the media are good.

As said earlier, Patnaik holds the audience for the most part of the film and his approach is also impressive during this time. But things get out of hand for him as he looses out on his mission and does not accomplish what he actually wanted to do.

On the whole, Manalo Okadu is a brave take on media and how its urge to stay on top causes problems to the common man. A very interesting first half and intriguing set up are basic assets of this film. But the film falters completely during the second part as the serious issue is diluted by some inexperienced narration. If you are okay with the lack of entertainment and are game to watch a film with some message, you can easily attempt this film this weekend.