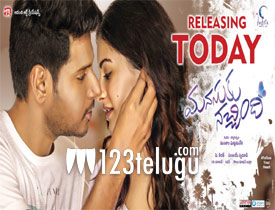 Mahesh Babu’s sister, Manjula is making her directorial debut with today’s release Manasuku Nacchindi. Starring Sundeep Kishan and Amyra Dastur, let’s now see how this film turns out to be.

Suraj(Sundeep Kishan) and Nithya(Amyra Dastur) are childhood friends who elope from their own wedding. Their concept is how come two close childhood friends get married to each other. But all this, changes upside down with the entry of Tridha Chowdary and Adith. Rest of the story is as to how the close friends realize that their relationship is not just friendship but pure love.

The set up is very good as the film looks quite fresh with superb visuals. A lot of detailing has gone into the camerawork and because of this, the film looks vibrant throughout.

Sundeep Kishan looks good in the film and plays his part to the best of his capabilities. Heroine Amyra Dastur gets a meaty role and does well with her performance. She has done well in the second half and is good in all her heartbreak scenes.

Music of the film is decent as all the songs sound and look good on screen. The second half of the film is where the actual love story begins and is a tad better when compared to the first part.

The story of the film is quite old and has been showcased in many films. Two childhood friends realizing that they are meant to fall in love is a regular part of many Telugu films from years.

Too much focus is given to nature and how should one connect to it on an emotional note. This is where the film falters as the basic love story and emotions take a back seat.

The way Sundeep Kishan realizes his love is showcased on a silly note. His character is not derived properly and he has no clue what he is up to most of the time.

As said earlier, production values of the film are top class. Special mention should go to the cameraman Ravi Yadav who makes things lively with his breezy visuals. The color palette he uses and the manner in which he showcases Goa is quite good. Dialogues are decent and the production design is very good. Editing is just about okay as the first half could have been trimmed by 10 minutes easily.

Coming to the director Manjula, her idea of connecting the lead pair through the mother nature and listening to one’s heart is good but her execution could have been better. The way she starts the story and brings in the twist is very ordinary. There was a good scope of good drama and romance but they have not been incorporated well. She manages things well in the second half but by the time it is too late.

On the whole, Manasuku Nachhindi is a routine romantic drama which you might have seen many times in the past. Rich visuals and some love failure moments in the second half are basic assets. On the flip side, lack of strong connection between the lead pair and average screenplay make things difficult most of the time. All those who like love stories can give this film a shot but the regular audience need to look for other options this weekend.