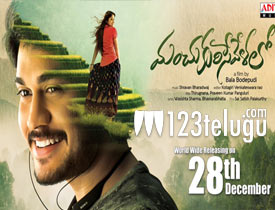 Along with Bluff Master and Idam Jagath, yet another small film called Manchukurisevelalo has also hit the screens today. Let’s see how it is.

Anand Krishna(Ram Karthik) is an engineering graduate who works as a part-time Radio Jackey. One fine day, he spots a beautiful girl called Geetha(Pranali Ghoghare) and falls for her instantly. To his luck, Geetha joins his college and slowly a friendship blossoms between them. When Anand decides to express his love, Geetha suddenly opens up about her sad flashback with Prakash(Yashwanth). Who is this Prakash? what is his relation with Geetha? What will Anand do to win his love? and Will Geetha accept Anand’s love at the end? To know about this, you have to watch the film on the silver screen.

The main hero, Ram Karthik is decent and his performance is pretty good in the role of a desperate lover. The second hero, Yaswanth did a fair job in his limited screen presence.

Apart from looking good, Pranali Ghoghare got a meaty role in the film. She gave an impressive performance in the role which has two different shades and had good scope to perform.

The film takes much time to enter into the main story which is revealed only in the second half. The core drama is missing in certain areas as scenes are not explored much in the proceedings.

Once the backstory of the heroine is revealed, the film becomes a bit predictable in the second half. Generally, films in this youthful love genre have a lot of scope for entertaining elements but the makers should have added more fun stuff to make things breezy.

Music by Shravan Bharadwaj is good as the two montage songs are composed well. But his background score is not up to mark. Production values for this low budget film are quite impressive and neat. The Cinematography can be termed as the biggest asset as the film offers a few pleasant visuals. Especially, the natural locations in Ooty are captured beautifully. A few meaningful dialogues which come at a crucial junction of the film are good. Editing work is okay.

Coming to the director Bala Bodepudi, his idea of making a love story with a sad flashback is impressive and he narrates certain scenes well. But if he would have stressed more on the emotion part, the result would have been even better.

On the whole, Manchukurisevelalo is a youthful love story which lacks freshness. Beautiful locations and heroine’s character are basic plus points of the film. But the routine and predictable proceedings play spoilsport in the film making it a below average fare this weekend.