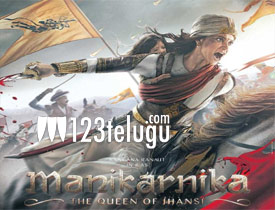 Kangana Ranaut’s much-awaited period drama, Manikarnika has grabbed everyone’s attention with its promising trailer. Promoted as a biopic of the warrior queen, Rani of Jhansi, the film has hit the screens all over today. Let’s check what worked and what didn’t for the film.

Manikarnika – The Queen of Jhansi is the real story of a warrior queen Manikarnika(Kangana Ranaut), who stood against all odds to safeguard her kingdom Jhansi and declared a war against the British rule to bring Independence to our Nation. Set in the time period of 1890, the film gives an in detail narration of the braveness of Manikarnika and how she sacrificed everything for the nation.

Kangana Ranaut perfectly fit in the role of Manikarnika and delivers an award-winning performance. Especially, her acting during a few crucial emotional scenes is outstanding and brings a lot of depth to the proceedings. The way she behaves like a queen and her facial expressions are apt for the role. If not Rangana, no one would have pulled off this role with so much ease and utmost dedication.

Interval block which highlights the importance of Laxmi in the kingdom is executed effectively. The details of how Manikarnika’s name is changed to Laxmi- The Queen of Jhansi in the first half is nice.

The war sequences in the second half are executed in a gripping manner and bring a patriotic feel to the audience. Ankita Lokhande and Mishti Chakraborty are a surprise package in the film as these two young ladies are impressive as Manikarnika’s support system. Jisshu Sengupta, Danny Denzongpa are good in their given crucial roles.

The pace of the film is a bit slow at times which can be termed as a big drawback of the film. Though the starting proceedings give an in detail character establishment of Manikarnika, they may not go well with a section of the audience.

Firstly, Kangana should be appreciated for balancing both acting and direction work perfectly. Our Telugu director Krish should also be given credit as the film has partly been directed by him. Star writer, K. Vijayendra Prasad has done his part perfectly by penning the untold story of a great warrior queen in a good manner. Though his screenplay has a few lags, the overall script is good.

Production design for the film is outstanding as all the sets and costumes designed are appealing. Editing work is good as the film’s runtime is kept in limits without any unwanted scenes. The cinematography is perfect as the film’s scale and lavish set work is evident on the screen. Music by Shankar–Ehsaan–Loy is fine and background score by Sanchit Balhara Ankit Balhara is apt for the film. Production values by Zee Studios are rich and lavish.

On the whole, Manikarnika is a gritty story of the unsung warrior queen Laxmibai. The way she fought with the British to safeguard her kingdom has been showcased in a good manner. The film might do well in Hindi but the lack of proper promotions and a slow-paced narration may hamper the viewing experience of the Telugu audience. So, watch it at your own will.