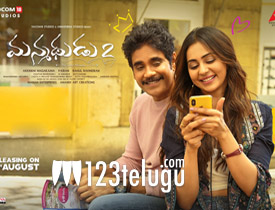 Manmadhudu 2 is one film which many were waiting for eagerly. Directed by Rahul Ravindran, this film has hit the screens today and lets see how it is.

Sam(Nagarjuna)and his family are based in Portugal. While Sam’s mother and his sister’s stay together, Sam is a free bird who does not believe in relationships. But because of heavy pressure from his family to get married, he sets up a waitress(Rakul)to act as his girlfriend and cheat him so that his family would never force him again for his marriage. But because of a small twist, things change upside down and Sam becomes helpless. Rest of the story is as to how Sam sets his mistakes right and wins the hearts of his family.

There is no denying the fact that Nagarjuna is the best when it comes to the looks. He is super sharp and looks perfect in the role of a mature bachelor. Though he did not have much to do performance wise, his screen presence is superb throughout the film.

Rakul Preet Singh gets the best role in the film. Not only does she look super glamorous, Rakul has also done a very good job as Avantika. The manner in which her role is executed by Rahul looks good on screen.

The first half is breezy and credit should go to Vennela Kishore for holding this part through his good comedy. His chemistry with Nag works well in the film and holds the proceedings together during this time.

Rao Ramesh is hilarious in his role but he is not utilized well in the proceedings. Lakshmi is apt in her role and so was Jhansi. Production values are top notch.

As the film is a remake, there are really no surprises in the script. Story is ages old and has been used in several Hindi films previously. It was left to director Rahul as to how he would narrate the film. He did a decent job in the first half but spoilt the second with his dull narration.

There are way too many unnecessary scenes in the second half which make the narrative slow and dull. The main plot is put aside and the love story between the lead pair is also not established well.

After a slow start to the second half, things rush to the climax all off a sudden and because of this, the emotions do not work well. There is a bit of vulgarity as scenes like Rakul kissing Jhansi could have been totally avoided.

Except for Jhansi, the rest of the supporting cast is bad. Samantha and Keerthy Suresh’s cameos do not create any impact at all.

As said earlier, the production values of the film are superb as the good camerawork showcases the Portugal locations in a good manner. Music by Chaitan Bhardwaj is good and so were the lyrics. Editing is below par as the film needs to be trimmed by atleast 10 minutes. Production design is good and the costumes designed for Nag and Rakul are superb.

Coming to the director Rahul Ravindran, a lot was expected from him after Chilasow. He had the set up and good star cast but he did not create the emotions well in the film and this is where the film takes a downfall. But he has showcased Nagarjuna quite well and justified his age with decent romance. If he had a tighter screenplay in the second half, things would have been better.

On the whole, Manmadhudu 2 surely does live up to the hype and expectations created. Nagarjuna and Rakul Preet manage things well but the weak second half and routine story take things down. The comedy punches by Vennela Kishore work well but the rest of the emotions don’t as the film does not have entertaining proceedings which light you up and ends as a strictly okay watch this weekend. All we suggest you is to keep you expectations low.