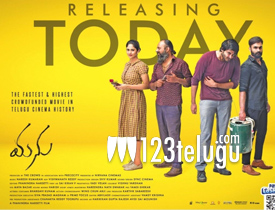 Manu is one film which has created a decent buzz for itself with its intriguing trailers for the past few weeks. After a good round of promotions, the film finally hit the screens today. Let’s see how the film turns out to be.

The film starts off in a bar where Nila(Chandni Chowdary) tries to woo Manu(Gautam) who is a fabulous painter. But with a small misunderstanding, the couple gets into a fight and Nila leaves the bar. On the other hand, Manu saves an old man from the clutches of three gangsters in the same bar. As time passes by, Manu comes to know that the goons are after Nila now. Who are these goons? What are they up to? and what connection do they have with Nila? To know these answers, you need to watch the film on the big screen.

The premise of Manu is quite interesting as there are only four to five characters in the film. The effect that the film generates through its arresting visuals makes it quite different from regular Telugu films.

Chandni Chowdary looks beautiful in her crucial role. Her screen presence is very good and she does quite well in all the emotional scenes. Manu showcases her as a good actress and Chandni’s performance should really help her in the future.

Coming to hero Gautham, he has vastly improved from his previous films. From looks to performing in a complex role, he has done it quite efficiently. The love story showcased between the lead pair is a bit interesting and has some precious moments.

So much was said about the film’s screenplay that it would be quite new and different. But the same screenplay is the biggest villain of the film as the director fails to generate a clarity of what is happening in the film. Until the halftime, things are unclear and you keep scratching your head as to what is actually going on in the film.

If there is anyone who should be blamed for the slow pace, it is undoubtedly the director Phanindra. He is the one who makes things quite complicated. His idea of narrating the film with reverse screenplay not only flops but makes it hard for the common man to understand. All you get to see if the film with a simple twist going on and on for hours together.

Yet another aspect where the film disappoints is the length of the film. Thrillers need to be crisp and fast but Manu moves is quite long and leaves the audience restless. What could have been a simple and good visual thriller is completely spoilt by the director’s overconfidence in the world he created which is like a full toss for others?

Manu is technically very strong as the visuals are of international standard. Camera work by Vishwanath Reddy needs to be credited as the film has a different color palette and looks quite cool. Production design by Shiva Kumar need a special mention as the setup showcased and props used, give the film a very posh look.

Editing is pathetic as at least half an hour needs to be toned down right away. Dialogues are superb and give an edge to the film. Production values are top notch for a film with a low budget. To top it off, the best part of the film is the riveting background score by Naresh Kumaran which breathes life into the otherwise dull narrative.

Coming to the director Phanidra, he has made some very good short films but that is not the case with Manu. He has taken a simple story and set it in his own world which is different from others. He got the look and feel of the film right but his over creativity and way too complicated screenplay take the film down in no time.

On the whole, Manu does not live up to all the hype and expectations that have been created before the film’s release. The thriller is way too long, moves at a snail’s pace and confuses you to no extent making it difficult to sit through three hours of runtime. Apart from some decent performances, good visuals, and thumping background score, this film has nothing great to offer and can be watched only if you have loads of free time on your hand.