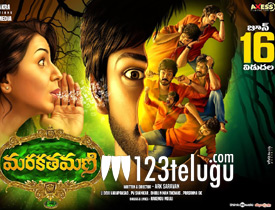 Continuing the trend of dubbed Tamil films, the new movie which has come out today is Aadi Pinisetty’s Marakatamani. Let’s see how this crime comedy is.

The story of the film is about an ancient diamond called Marakatamani. Over a period of time, all those who try to steal the prestigious stone keep getting killed in mysterious situations.

This is the time when a small time smuggler played by Aadhi comes forward to rob Marakatamani. He approaches a pujari who suggests him to take the help of some evil spirits in order to stay alive and complete his tasks.

What will Aadi do now? How will he create evil spirits? and moreover, how will he steal Marakatamani? That forms the rest of the story.

On of the biggest plus points of the film is the way the evil spirits have been generated into the story line. The comedy that this thread evokes is very good most of the film. The small time crime comedy, villains chasing the hero and the various other spooky factors have been handled well.

Aadi plays a pivotal role and does a very sincere job. He mixes well with the setup and his track with Nikki Garlani is quite interesting. She has a unique role in the film and does extremely well in her character.

Ramdoss who plays a key role of a spirit is hilarious in his act. He along with his group save the film most of the time and evoke some very good fun in the second half.

The story of the film is quite fictional and has many over the top moments. The evil spirits coming into existence and helping the hero look good in places but has been over done a bit in the first half. Lack of known faces can go against the film as there are all new Tamil actors playing crucial roles.

Nikki Garlani’s romantic thread with Aadi is side tracked and could have been elevated a bit. The first half of the film is very slow as the proceedings take forever to get to the actual twist of the film. Though the film has some good comedy during this time, the story does not move one bit. The villain’s thread though started interestingly, becomes quite silly by the time the climax arrives.

The film’s set up looks good and the decent camerawork makes the scenes look quite interesting and spooky. The background score of the film is very impressive and elevates the film nicely. Dubbing done is just about okay and so were the production values.

Coming to the director Saravanan, he has done a decent job with the film. His story looks over the top but he adds some clean and good humor at regular intervals and makes this film quite interesting during the second half. Had he rushed the first half and brought the twist at an earlier stage, the film would have been even more interesting.

On the whole, Marakatami is a passable fantasy thriller which has its moments. The makers cleverly induce good fun at regular intervals and side track the over the top storyline. If you ignore certain logics here and there and are okay with some time pass situational comedy, this crime thiller can be given a shot this weekend.