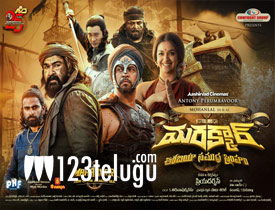 Marakkar is Mohan Lal’s prestigious film to date and has been released in multiple languages. Let’s see how it is.

The story happens in the 16th century and is about the life of Kunjali Marakkar(Mohan Lal). After his family gets brutally killed, Kunjali heads to the forest and becomes a Robinhood for the poor. In the same time, the kingdom of Zamorin is attacked by the Portuguese. The chiefs of the kingdom approach Kunjali and ask for his help. The manner in which Kunjali fights the Portuguese and comes out victorious is the basic story.

The visual effects of the film are pretty good and are a major attraction. Also, the presence of multiple stars is also an added advantage as the screen is filled with stars all the time. The backdrop of the film is also realistic and gives an insight as to how things were in those times.

Mohan Lal is the light and soul of the film and gives a terrific performance. The star hero is superb in an action-filled role and carries the film on his shoulders. Keerthy Suresh does well in her role along with Arjun, Sunil Shetty, and Kalyani Priyadarshan. The stunts and action blocks have been executed well.

The second half of the film is where things go down. The proceedings are dragged for no reason and multiple character entries drag the film and make it lengthy. The film has a heavy Malayalam nativity and this might be a concern for some viewers.

Also, the emotions during this time are not that strong and look forced. Most of the film is done in the first half and nothing much is left in the latter to make up for a gripping watch. Also, the manner in which the Telugu dubbing is done is not that great.

Production values of the film are top-notch as all the money spent is shown on screen. The production design by Sabu Cyril is superb and is filled with spectacular props and a royal look. The action is amazing but the editing was dull as close to ten minutes could have been chopped off.

Coming to the director Priyadarshan, he has done just a below-average job with the film. His story is inspired by films like Troy and has so many traces of it. He narrates the first half well but bores the audience in the second half.

On the whole, Marakkar is visually quite good but lacks depth in the emotions. The proceedings are lengthy, lack the emotional connect and heavy Malayalam flavor turns you off. If you like war dramas give this film a shot and the rest can take it easy.