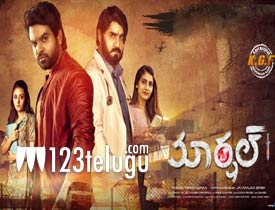 Marshal is a film which has been promoted quite well in the past few days. The medical suspense thriller has hit the screens today and let’s see how it is.

Sivaji(Srikanth) is a movie star who has a crazy following. One of the fans is Abhi(Abhay) and his only dream is to take a selfie with Sivaji but that does not happen. As time passes by, Abhi comes to know that Sivaji is not what everyone thinks of him and has a bad side to him. Upset with this, he decides to reveal Sivaji’s real side to the world. In this process, what did Abhi do and where does Megha played by Megha Chowdary feature in this set up.

The film is a medical suspense thriller and has a decent concept. Srikanth is top-notch in his role of a star and gives good modulation in his character which has different shades. He uses all his experience and brings a lot of depth to the film. The mother sentiment shown in the film is good and the message showcased at the end is also convincing.

The confrontation scenes between Srikanth and Abhay have been designed well and the actors do their best in these scenes. Hero Abhay does an impressive job in his role. He managed to confront a settled actor like Srikanth well in many scenes. His performance was very good in the climax.

The scenes showcasing the medical system have been written well. Heroine Megha Chowdary looks glamorous and also acted well in her role. The interval twist is brought well in the film and so was the climax which looked good.

The first half is narrated in a slow manner and the screenplay also becomes dull during this time. Although the scenes regarding the medical field have been written well, they are not effective in a few scenes. There is forced comedy in this film which could have been avoided completely.

The film has a roller coaster kind of a feel. One good scene is hampered by a forced situation and this sidetrack the film. After the point, there are way too many scenes which look forced and make the proceedings dull. There was a good scope for emotional content to be elevated but the makers did not make use of it.

Re-recording by KGF fame Ravi Basuri is pretty good in the film. Editing is just about okay as at least five minutes in the first half could have been chopped off. Even though the film is made in a limited budget, the production values look rich and are ably supported by decent camerawork. Music by Yadagiri is decent but his BGM was better.

Coming to the director Jairaj Singh, he has chosen an interesting concept and narrated the film well for the most part. But he gets carried away a bit and adds forced comedy and unnecessary scenes which dilute a film a bit. If his narration was on point, the film’s output would have been even better.

On the whole, Marshal is a medical suspense thriller which has a decent premise. The plot looks novel and the narration is also decent for the most part. Srikant leads from the front and handles the plot well. But all this is spoilt by some forced comedy and unnecessary scenes which come at regular interval and make this film a strictly okay watch this weekend.