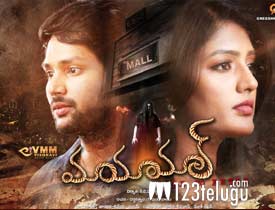 Continuing the trend of low budget films, yet another horror comedy which has hit the screens is Maya Mall. Let’s see how it is.

Dileep(Dileep Kumar) and Mytri(eesha) are lovers who decide to marry against their parent’s will. The elope from their village and land in a shopping mall for some purchase. This is also the time when a small mishap happens in the mall and the coupe gets stuck in the mall along with Shakalaka Shankar and Tagubothu Ramesh.

What is that mishap? How will the couple come out of the mall? and Is there a scary factor related to the mall? To know answers to these questions, you need to watch the film on the big screen.

The basic twist in the climax is pretty interesting. Telugu girl, Isha has done a wonderful job in her role. She brings a lot of depth to the film with her performance. Deeksha Panth provides some good eye candy for the masses.

Newcomer Dileep is also good for his first film. Happy Days fame Sonia is decent in her role and looks good. Some horror effects here and there are decent enough in the film. The way entire film runs in a single mall looks quite convincing.

One of the biggest drawbacks of the film is the routine horror comedy line. There is nothing new in this film as the proceedings are a copy of many recent horror comedies. The film looks fake most of the time with silly proceedings.

Shakalaka Shankar and Tagubothu Ramesh do not evoke any laughs as their roles have been written quite weakly. Prudhvi has not been used to his fullest. There is no depth in the emotions showcased as the proceedings are filled with some over the top comedy and outdated twists.

As said earlier, the way the shopping mall has been showcased with good camera work is quite interesting. Coming to the director Govind, he has done a very poor job with the film. His narration is quite bland as he has written only some scenes well. But as a whole, he makes the film quite predictable. Background score was good and so was the editing part.

On the whole, Maya Mall is yet another routine horror comedy which has absolutely nothing to offer. Except for some eye candy of Deeksha Panth, this film is a letdown and can be ignored this weekend.