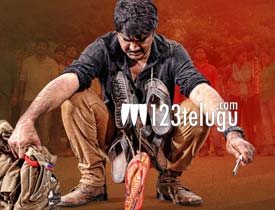 Senior actor Srikanth, who is waiting for a decent success since a long time is now testing his luck with his latest film Mental. Directed by S.K. Basheed, the film has finally hit the screens today. Let’s see how it is.

Durga Prasad (Srikanth) lands up in jail during his childhood for murdering the goons who killed his mother. There, he realizes that only a Police officer has the license to kill people who commit the crime and starts aspiring to become a cop.

As the time passes by, Durga becomes a sincere and ruthless cop who does not tolerate any kind of atrocities. Due to his aggressive nature, everyone calls him as Mental Police.

But things go wrong when Durga locks horns with a powerful local goon(Ajay Ghosh). What consequences does Durga face ? What is the role of Durga’s wife Rama (Aksha) in this drama ? And how did Durga overcome all his odds ? That forms the rest of the story.

The major highlight of the film is the way all the loop-holes in our society are showcased. Srikanth carries the entire film on his shoulders and excels in his character. He is exceptionally good in all the confrontational scenes with the villain and gives a sincere performance.

The first fifteen minutes of the film are pretty interesting and have been nicely set up. The aggressive dialogues in few scenes work well. The first half has some decent moments and the interval twist is nice.

Mental has a beaten to death formulae which have been showcased in many cop dramas. Though there is a huge star cast, no one has a meaty role except Srikanth. As in many cop dramas, the proceedings are quite predictable and you exactly know what is going to happen next.

After the interesting interval block, the second half starts on a flashback note and keeps on dragging till the climax. Aksha is absolutely wasted in the role of a lead heroine. At least two songs disturb the flow of the film big time. There are many unnecessary comedy scenes in the film which irritate at regular intervals.

The production values of the film are very average. Music by Sai Karthik works only in parts as songs have no scope in the film. Editing is mediocre and at least 15 minutes could have been trimmed in the second half. The cinematography is good.

Director S.K. Basheed wanted to elevate many social issues and ends up getting confused and does not stick on one problem. He completely fails to use his star cast as the entire film is only centered around Srikanth.

Overall, Mental is an outdated and beaten to death cop drama which bores the audience to the core. The makers wanted to portray Srikanth in a character similar to that of Operation Duryodhana but completely failed in doing so. If you love watching over the top and clichéd cop films, you can give this film a shot. Rest can take it easy.