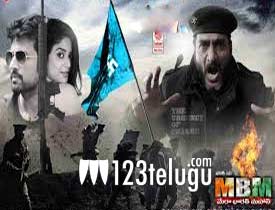 Along with Avengers Endgame, yet another patriotic film titled, Mera Bharat Mahan has hit the screens today. Let’s check how it is.

Mahan(Sridhar Raju ) is a frustrated youth who establishes an organization called MBM(Mera Bharat Mahan)Through this, he decides to fight inefficient politicians and expose the corruption they do in the corporate world. What circumstances led him to fight against the system? How youngsters like Karthik (Akhil Karthik) and Sanjana(Priyanka Sharma) helped him in this process? Will, he succeeds in this tough path? To know this, you have to watch the film on the silver screen.

The film addresses the burning social issues in contemporary society and showcases the loopholes in the system. A few episodes on corporate management and its education system are very much close to ongoing students agitations in the state.

A satirical take on government hospitals and various schemes like Haritha Haram and inefficient administration is good. Akhil Karthik, Priyanka Sharma, and Sridhar Raju are decent in their purposeful roles.

Though the film mainly deals with social issues, those episodes could have been narrated in an even better manner. The reason for hero establishing MBM organization is not projected in a gripping way.

Heroine’s character lacks proper clarity as her character is degraded during the pre-climax all of sudden. It’s good to see Giribabu and Babu Mohan on screen after a brief gap but they are not utilized properly.

Director Bharat’s idea of making a film on government failures and corporate dominance in the society is nice but he should have focused more on writing the screenplay in a gripping manner. Editing work is okay but could have been better. Cinematography is good as a few natural locations in songs are captured well.

Music for this patriotic film is decent as two songs and background score is good at parts. Production values for this low budget film are just about okay.

On the whole, Mera Bharat Mahan is a serious drama which exposes the failures in the system. A few social issues in the society are addressed in a daring manner but lack of effective narration in the second half and engaging drama makes it a boring watch for this weekend.