Review : Mercury – Only for select Audience 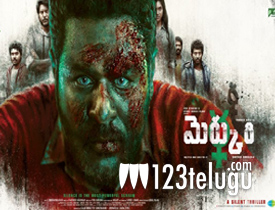 The makers of Mercury have been promoting the film quite aggressively over the past few days. The silent thriller has finally hit the screens and let’s see whether it lives up to its expectations or not.

The film is set amidst a group of five deaf and dumb friends who accidentally kill a man(Prabhu Deva) during a road journey. Appalled with their ghostly crime, they cremate the body in a nearby forest. But to their bad luck, the dead man comes live and makes their life hell. Well, how does all this happen forms the entire crux of the film.

One of the biggest plus points of the film is the camerawork. The way Thiru has showcased the entire film in a different color tone and used amazing camera angles is quite good. The way the reactions of the artists have been tapped creates a good effect for the film.

Prabhu Deva gives his honest best and is good in his negative role. The way he showcases his expressions and helplessness as a wounded man has been elevated quite well. Credit should also go to the group of actors who played crucial roles. Each and every actor does his best and showcases the helplessness in a spectacular manner.

The second half has some thrillings scenes which create a lot of interest. A scene where Prabhu Deva chases two members of the gang and the manner in which they escape has been showcased on a superb note.

The runtime of the film is quite less and there is absolutely nothing much interesting in the first half as all the characters and crime is established. The sound design which plays a crucial role is just about okay and could have been a lot better.

The film is a rehashed Indian version of the Hollywood film Don’t Breathe as the story is tweaked with a bit of sentiment at the end. The film is not for the regular audience as it has no dialogues and runs on a serious note with just one motive.

Mercury is quite strong in the technical aspect department. The production design of the film is just too good as the chemical factory and the gory setup has been showcased in an amazing manner. As said earlier, the camerawork lifts the film in the second half and makes you believe that you are in that scene in certain places. Coming to the director Karthik Subbarjaj, he has done an okay job with the film. He sticks to the plot and derives characters in such a way that support the concept of the silent film. His story is heavily inspired but he manages things with his interesting narration in the second half.

On the whole, Mercury is a rehashed version of the Hollywood film ‘Don’t Breathe’ which clicks only in the second half. Decent thrills and realistic narration make things look different during this time. The film might not be liked by every section of the audience and will have a limited appeal at the box office. All those who are fed up with the regular masala films and want to find out how a silent thriller is executed, this film can be given a shot. But the rest can have their options open this weekend.