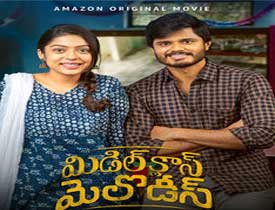 So, continuing the series of reviewing OTT shows and films, our today’s pick is the Telugu film Middle-Class Melodies. The film is available on Amazon Prime and let’s see how it is.

The film is based in Guntur. Raghava(Anand Devarakonda) is the son of a middle-class couple who wants to make it big in the hotel business. Unlike his father, Raghava wants to go to Guntur and establish his hotel there. But he does not have money and upon this, he is in love with Sandhya(Varsha Bollama). After struggling hard, he somehow manages to establish a hotel in Guntur but his business fails to click. This is also the same time when Sandhya’s father is trying to get her hitched. The rest of the story is as to how Raghava turns his business successful and also marries Sandhya.

As the title suggests, Middle-Class Melodies is a film that depicts the issues that people deal with in their middle-Class lives. The setup, earthy characters, and emotions attached to each are nicely established. Credit goes to the director Vinod for keeping the characters true to themselves. The supporting cast plays a strong part and every track has a justification.

Ananda Devarakonda is quite impressive in his second outing. He is very much at ease now and had a key role to play and the young actor did it supremely well. The manner in which the director extracted work from Anand is also good. The way Anand mouths Guntur slang, stays true to his expressions was good. The whole concept of making Bombay Chutney also fit nicely in the story.

Varsha Bollama suits her character perfectly and emotes with her eyes beautifully. Her love track with Anand is quite mature and holds the film well and is never a disturbance. With each film, young actress, Divya Sripada is getting impressive and does a superb job in this film as well and is an actress to watch out for.

But the main man who is one of the pillars of the film is the hero’s dad. He is a theatre actor from Guntur and does supremely well in his role of a restless father. The comedy he generates is also good. The actor who played the hero’s friend is neat. The small town visuals are quite impressive and the simple bonding between the characters holds you on screen.

As said earlier, there is no great story in this film. A small-town boy wanting to make it big in a city has been showcased in several films. The film is a bit slow and as all the characters are established in a sweet own time, things take a bit of the screen time.

Though the stories of the supporting cast look good, they are not much connected to the main story. The climax of the film could have been a bit better as the film is ended on a simple note.

Music by Sweekar and RH Vikram is decent and so was their BGM. Also, the camera work showcasing Guntur and its surrounding areas were very good. Editing could have been better as a few scenes in the pre-climax could have been edited out. The production design of the film is superb and so were the lyrics.

Coming to the director, Vinod, he makes an impressive debut. Though he chooses a simple script, he nicely showcases the simple yet strong emotions in the middle-class lives which hold your attention till the end. He should be praised for balancing comedy, emotions, and romance neatly.

On the whole, Middle Class Melodies is a romantic family drama that is filled with nicely executed emotions. Though there is nothing special in the story and the pace is slow, the realistic performances, simple fun, neat romance, and decent narration make this film an endearing watch.