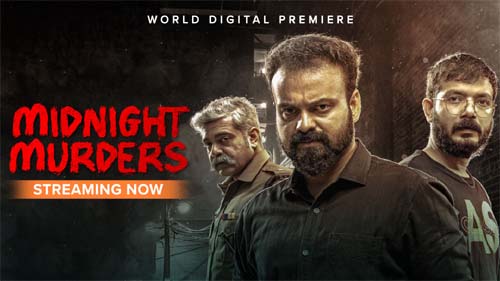 Exclusive Telugu content provider, Aha has dubbed yet another Malayalam film, Anjaam Pathiraa in Telugu. Titled Midnight Murders, the film was premiered on Aha on February 19, 2021. Let’s see how it is.

Obliging his close friend’s request, Anwar Hussain (Kunchacko Boban) a psychologist by profession, works as a consulting criminologist in the Kochi Police department. All of a sudden, Anwar comes across a case where a series of brutal police murders happen at midnight. Who is the culprit behind these murders? What is the main motive behind his crimes? How will Anwar crack the mysterious case? – These elements form the rest of the story.

Looks-wise, Kunchacko Boban is good and also impresses with his impactful performance throughout the movie. Especially, his acting in a few key investigation episodes and during the climax brings a lot of depth to the drama that unfolds.

The actor who played the main antagonist’s role is quite good and gives a convincing performance. The way the murders are showcased has been presented with an interesting narration.

The actress who essayed the lady officer’s role impresses with her acting, effectively portraying multiple dimensions. Noted actress Pooja Ramachandran also does a key role in a convincing manner.

Even though the core point of the film is interesting, the narrative has a few loopholes and illogical scenes. As the film runs on a serious note, it may not get a universal appeal. Adding to it, the crucial scenes in the movie are not established in a proper manner.

Director Midhun Manuel Thomas’ idea of making a crime thriller based on police murders is good, but he should have spent more time in writing a better screenplay.

The cinematography by Shyju Khalid is superb. He particularly showcases the night shots in a brilliant manner.

Music by Sushin Shyam is apt for the film’s content and his engaging background score only elevates all the key scenes. Editing by Saiju Sreedharan is apt. Production values for this limited budget film are decent.

On the whole, Midnight Murders is a crime thriller which deals with a unique point. Even though the core point and the scenes involving murders are good, it may not get a universal appeal due to the serious narration, making the film a one time watch for Aha subscribers.