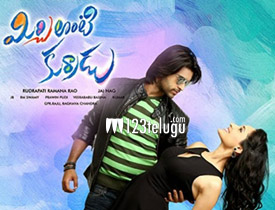 Young actor Abhijeet, who made his debut with Sekhar Kammula’s Life is Beautiful, is trying to make a mark for himself in Tollywood. Mirchi Lanti Kurrodu is his latest film which has hit the screens today. Let’s see how it is.

Siddhu (Abhijeet) is an easy-going youth who lives in Hyderabad. One fine day, he comes across Vasundara (Pragya Jaiswal) and falls for her instantly. Vasundara is a generous girl and she too accepts Siddhu’s proposal after a while.

Twist in the tale arises when serious differences arise between the couple and they get separated. What is the reason for their separation ? Will they leave their difference behind and re-unite with each other ? What happens at the end ? That forms the rest of the story.

Rao Ramesh steals the show with a superb performance. His thought provoking dialogues, which are aimed at the youngsters of the current generation are a good attraction in the film.

The story of the film is a big minus. It is quite predictable and has nothing new to offer. Despite being touted as a commercial movie there is no elevation for the hero’s character.

The second half is a big let down as many unnecessary scenes stretch the film completely. The climax is ludicrous and has nothing much interesting. Supreet’s role as a villain goes wasted.

Despite having many comedians, the comedy tracks are not handled well. There are many unnecessary characters in the film which could have easily been avoided.

Director Jay Nag should have opted for a even more convincing subject. The predictable screenplay doesn’t make things interesting either. Music and background score by JB is average. Many unwanted scenes could have easily been trimmed by editor Prawin Pudi.

The emotional dialogues written by Veerababu Basina are decent. Cinematography by RM Swamy is neat and the production values are pretty good.

On the whole, Mirchi Lanti Kurrodu is a routine love story which lacks the elevation required for a typical commercial film. Rao Ramesh, Abhijeet and Pragya Jaiswal are decent in their roles along with the ok first half. But the predictable story line and a foolish climax go against the film completely and make it a disappointing affair at the box office.