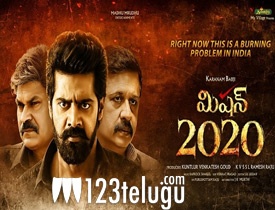 Naveen Chandra is back with a new film called Mission 2020. The film is out now and let’s see how it is.

Naveen Chandra is the basic highlight of the film and does well in his cop’s role. The other supporting cast like Naga Babu and Satya Prakash also do well in their characters.

The story idea is good but the narration lacks basic focus. The first half is slow and the emotions are dragged and look forced on the audience. The key conflict point between the characters is not established well.

The character of Swathi is not elevated well by the director. Also, the film gets into the main story only during the interval time and by then, the audience loses interest in the proceedings.

The production values of the film are decent but the music looks dull. The BGM is okay but the screenplay has gone for a toss. The camerawork is decent but the editing is pathetic as the film is filled with lag. Coming to the director Karanam Babji, he has done just a below-par job. His story is good but his narration falters in several areas.

On the whole, Mission 2020 has a good message-oriented subject but falters in narration. Except for Naveen Chandra’s sincere performance, this film falls flat and ends as a boring watch this weekend.