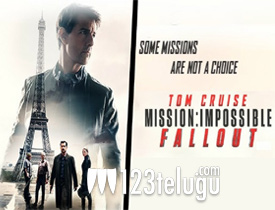 The much-awaited outing from the Mission: Impossible franchise, Fallout, has released today amidst sky-high expectations. Made on a mammoth budget, let’s see whether the movie lives up to the hype around it or not.

Ethan Hunt(Tom Cruise), who is struggling to get over the decisions he took in the past, sets out on the first-of-its-kind mission. Just when he seems to be on the top of the proceedings, a group of anarchists, who believe that the world should be put through suffering in order to restore peace, come in his way and make the mission a whole lot complicated.

Ethan Hunt is left with no other option but to put his life, credibility, reputation, identity, and everything he stands for, on the line. Can Ethan, along with his team(IMF) withstand this enormous pressure and get over the line? You should see the movie on the big screens to see how this exhilarating tale unfolds

The beauty of Fallout lies in the gargantuan scale it was made on. Each and every frame of the movie looks like a masterpiece that was carved with the utmost care. The stunts, action episodes, backstory, execution, visual brilliance, you name it Fallout has it.

Tom Cruise, as he has always been, is a peach of an actor. His hard work and dedication towards the movie are one of the main driving forces for this marvelous creation. The 56-year-old actor never lets his age get the better of him and the real-life stunts that he performs in the movie are nothing less to a treat for action lovers. Also, Henry Cavill is good in a menacing role and he came up with a commendable performance.

The main USP of Fallout is the perfect fusion of action with novelty. All the action episodes fall in the right place and not a single sequence looks like it was forced into the final cut. The real deal is the authenticity and experience that viewer is put through when this action unfolds on the big screen. Very few people would doubt the fact that Fallout is one of the best action-oriented movies in the recent past.

The number of twists and turns in the movie would be hard to count on fingers. If you stay concentrated enough, you are in for a pacy ride that keeps you engaged and on the edge of your seats.

One of the very few setbacks in Fallout is the brilliance of the script. Yeah, you read that right. The brilliance of the script. The technical detailing and the way the core plot unfolds leaves you no time to even take a gasp. The moment you stay off-guard, you lose track of the proceedings and everything from that point it is nothing but a highly confusing hero-villain drama.

The narrative in the initial stages is a tad confusing as a set of questions keep popping up in the minds of the viewers. The subsequent explanations, that are interlaced with Ethan Hunt’s past, can be a bit tricky for a section of the audience who have not watched the previous outings.

The director Christopher McQuarrie is very clear about the movie and its potential right from the scratch. His belief in the plot is very much evident on screen as the flow does not take a beating despite the infusion of action sequences.

The action department deserves a big round of applause for its commendable efforts. A few scenes in the movie, especially, the bike chase sequence and the skydiving scene in the first half have come out on a mind-blowing level. The camera department had a key role to play here and there is no doubting that the cinematography is one of the very best in recent times.

The climax of the movie stands as an epitome for the conviction of director, action department, cinematographer, and the music director as it looks breathtaking in every possible way.

On the whole, Mission: Impossible Fallout is an exhilarating ride, filled with some awesome thrills and spine-chilling episodes. Brilliant narration, paired with some adrenaline-pumping action sequences keeps the audience at the edge of their seats. The lead cast is heart and soul of the film as they bring this highly-engaging thriller to life with their splendid performances. The real-life stunts showcased are easily the best in recent times and that supersedes the flaws in the movie(if it had any). What are you waiting for? Go book your tickets and watch this superlative thriller for its sheer brilliance and marvelous execution.