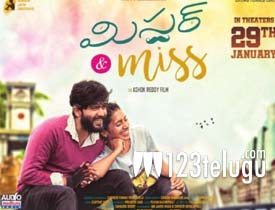 A crowdfunded film titled, Mister & Miss under the direction of a debutant named Ashok Reddy has hit the screens today. Let’s see how it goes.

After her sad breakup, a frustrated Sashi (Gyaneshwari) kisses Siva(Sunny) in a pub. Later, Siva joins Sashi’s office and they meet once again. As Siva faces trouble with his English, Sashi helps him and in this process falls for him. Impressed with the innocent and genuine character of Siva, Sashi proposes to him and starts living with Shiva. After a few months, due to a major conflict regarding a cell phone, Sashi decides to break up with Siva. Why is the cell phone so important to the couple? What is the backstory behind the cell phone? That forms the rest of the story.

Heroine Gyaneshwari is the best part of the film as she impresses with her screen presence and alluring performance throughout the film. Gyaneshwari’s acting and confidence levels are going to take her a long way.

Hero Sunny is decent as a small-town guy and sincerely tried to give an appealing performance. But he should surely improve his acting skills in the upcoming films to prove himself.

After the cell phone missing incident comes into the picture during the interval block, the entire second half runs on the single point of searching it. Though the emotional bonding is interlinked as a subplot in the entire searching process, it fails to connect to the audience.

The way the cell phone missing mystery ends look silly and should have been ended in a different way. As the film runs mostly on the lead pair, there is nothing much to talk about other factors in the film.

The hero getting a job even after knowing that he submitted a fake experience under the supervision of the heroine, the logical angle is completely missing here and should have been dealt in a better way.

Director Ashok Reddy’s idea of interlinking the emotional and romantic thread between the couple by using the cell missing concept is good but he should have worked in an even better way in writing a gripping screenplay. His dialogues work in parts but he surely wasted a good opportunity by executing this romantic drama in an unimpressive manner.

Editing work is good as the film’s run time is locked as 2 hours without any unwanted scenes. Cinematography is decent as the film has been captured neatly by balancing the budget constraints. Music is okay as two songs in the film are good to hear. Production values for this limited budget film are good.

On the whole, Mister and Miss is a romantic drama that has a missing cell phone as the backdrop. Though the first half of the film has a few adorable and breezy moments between the lead pair, the second half takes a new turn which lacks authentic narration in it making the film a disappointing watch this weekend.