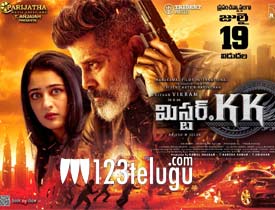 It has been quite some time that Chiyan Vikram has scored a hit in his career. He is back with an action thriller titled Mr. KK which has hit the screens today. Let’s see how the film turns out to be.

Vasu(Abi Hassan) and Aatirah(Akshara Haasan) are a couple who are expecting their first child in Malaysia. Vasu works as a doctor in a private hospital and in a tragic turn around of events, his wife gets kidnapped. The kidnappers ask Vasu to release a special patient named KK(Vikram) in order to save his wife. Vasu risks and frees KK but he does not know the consequences of KK’s past and the group of criminals who are chasing him. Who is this KK? What he is up to? and how does Vasu save his wife forms the rest of the story?

Vikram looks super sharp in his salt and pepper look. He does not have much to do in the first half but once the film catches pace in the latter part, Vikram is good in his stylish avatar in all the action sequences.

Akshara Haasan is very good as the pregnant lady and does a wonderful job in her role. Be it her expressions or body language, she was quite impressive. The film completely runs on Vikram and Abi Hassan and the young actor has done well in his crucial role. He as a helpless husband has done a good job with his expressions and body language.

The second half is where the action part picks. Special mention should go to Ghibran’s background score as it is terrific. Even the dull scenes in the first half are elevated well with his BGM. A car chase scene in the second half is shot supremely well.

One of the biggest drawbacks is that the film lacks good action sequences. The posters and teasers promised that the film will be full of action but that is not the case. Vikram hardly has any fights and the one which he does look quite ordinary and do not provide any thrill.

The narration is also jaded as Vikram’s motive behind the case is not shown clearly. Everything happens too quickly in the second half. The director wastes too much time to bring Vikram into action and makes the audience quite restless in the first half.

The thrills showcased are also quite routine and do not boast of anything new. The hero character is not elevated and this is where the film falls flat in many places. In many scenes, the character of Abi Hassan dominates Vikram and this aspect does not help the film one bit. The thrills which you expect from the action sequences featuring an actor like Vikram has not been showcased at all.

Technically, the film is top-notch. Camerawork by Srinivas is superb as the film has an international look with its visuals. The setup is good and the production values by Kamal Haasan’s company are perfect. Ghibran breathes life into the film with his BGM. Action sequences are ordinary and do not give that expected rush. Telugu dubbing is perfect and so was the editing aspect.

Coming to the director Rajesh Selva, he has chosen the premise well but has failed to narrate the film in a thrilling manner. There are suspense and thrills but the manner in which they are showcased do not provide any adrenaline rush which a thriller should generate. He has killed Vikram’s role and made him dull in the film.

On the whole, Mr. KK is an ordinary suspense thriller which does not have many things going its way. The so-called adrenaline-pumping action sequences are missing and the narration is also jaded. Vikram disappoints as his role is not elevated and this can let down his fans and general audience who come to see a stylish Vikram with a new makeover. Action lovers can give this film a shot but there is nothing much new and thrilling that is being showcased here.