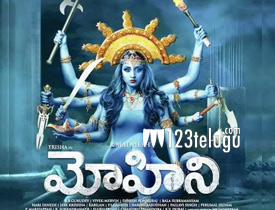 Trisha is back in action with a female-centric horror thriller titled Mohini. After several postponements, this Tamil-Telugu bilingual has finally hit the screens today. Let’s check how it is.

Vaishnavi (Trisha), who is a popular chef flies to London to assist her friend’s marriage. There, she falls in love with Sandeep (Jackky Bhagnani) and right when the couple decide to take their relationship to the next level, Vaishnavi gets possessed by an evil spirit called Mohini. Who is this Mohini? What is her backstory? and why did she enter Vaishnavi’s body? To know the answers you should catch the film in the theaters near you.

Undoubtedly, Trisha is a major asset to the film. Not only she looks beautiful but also gave an impressive performance as Vaishnavi and Mohini. She maintained a proper balance between both the roles and brought a lot of depth to the proceedings.

Popular comedian, Yogi Babu impresses with his funny body language and tried to evoke good laughs here and there. The climax sequence where the conflict point between the lead pair is narrated looks very nice. Senior actor Suresh’s acting in crucial scenes is good.

The major drawback of the film is its age-old storyline which offers nothing new. The execution part is totally a letdown as most of the scenes lack proper depth and engaging narration.

The film is completely filled with Tamil artists and over the top sequences which the Telugu audience might find hard to connect. Yet another minus point of the film is its lackluster CG work.

Production values are top notch as every frame in the film looks rich and captivating. Cinematography by R.B Gurudev is impressive as he tried to capture a few good locations in London. Editing work is not up to the mark. Music wise, songs composed by Vivek-Mervin are good but Aruldev’s background score disappoints big-time as it is too loud and unbearable.

Coming to the director Ramana Madhesh, he chose a routine revenge drama and tried to narrate it in a horror-comedy genre which backfires miserably. If he would have worked on the script more effectively the result would have been definitely better.

On the whole, Mohini is a routine revenge drama which lacks proper punch in the narration. Expect for Trisha’s gorgeous looks and impressive performance, the film has nothing new to offer making it a below average fare this weekend.