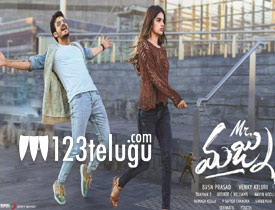 Mr. Majnu is one film which is very important for the career of Akhil as his last two films were received with mixed response. He has pinned a lot of hopes on Mr. Majnu which has hit the screens today. Let’s see whether the film gives Akhil his much needed hit.

Vicky(Akhil) is a playboy who does not believe in serious relationships. This is the time Nikki(Nidhi Aggarwal) falls for Vicky and proposes to him. Left with no choice, Vicky accepts her proposal and this is the time the problems in the love story blossom and the couple fall apart. Rest of the story is as to how Vicky takes things in his hands and wins his love back.

The premise of the film is contemporary as a routine story is set in the backdrop of London and it looks good on screen. Akhil has developed quite well when compared to his previous films. Look and performance wise he does well in his role of a playboy and dances superbly.

Nidhi Aggarwal is the star of the film as she gets a meaty role and performs convincingly. She has the looks and talent to make it big and she was quite efficient in her emotional character which had many shades yo portray.

Hyper Aadi saves the second half to an extent with his comedy. Priyadarshi too evokes some fun in the first half along with Akhil and his track is written well. Songs are decent and are an added bonus to the film.

The story of the film is ages old and has nothing new to showcase. The second half is where things go down as it is hard to understand as to why does the heroine takes forever to realize the hero’s true love for her. The basic drama which a love story needs is missing to an extent in the film during this time.

Also, the supporting roles played did not add much to the depth of the film. A family feud is unnecessarily dragged to no extent in the first half just to establish hero’s role. Scenes like this take down the film quite often.

Even though Thaman’s music score was just about okay to listen, on-screen all his songs look lovely. His background score was also quite efficient. Production values by BVSN Prasad were top notch as the London visuals were captured superbly by the camera team. Dialogues are neat and so was the production design. Editing is disappointing as close to 10 minutes could have been edited out in the second half.

Coming to the director Venky Atluri, he has done just an okay job with the film. His story idea is simple but he could not generate the needed screenplay in the film. He starts the proceedings quite interestingly but does not generate the needed romance between the lead pair. There are some good comedy scenes which keep coming in between but the lack of depth in the love story makes the proceedings a bit dull.

On the whole, Mr. Majnu is a new age romantic drama which has a decent setup. But the lack of emotional connect in the love story takes things down a bit in the second half. The lead pair does well and holds the proceedings to an extent. Novelty wise, there is nothing new in the film but some comedy episodes click here and there and keeps the viewers engaged. All we suggest you keep your expectations in check and go in with the flow of this film which ends as a below average fare this weekend.