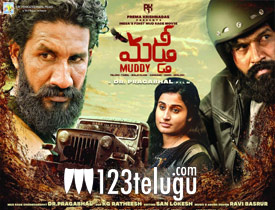 Muddy is a film that has been promoted a lot in the last few days. The mud-race thriller has hit the screens today and let’s see how it is.

Muthu(Yuvan) and Karthik(Ridhan Krishna) are brothers who are loggerheads with each other. Karthik is a mud-race driver who defeats a guy called Tony in one of the competitions. Not stopping at this, Karthik even breaks Tony’s leg. As time passes by, Tony comes back with a plan to attack Karthik. The rest of the story is as to how Muthu, who hates his brother, saves him from the evil crutches of Tony.

The film has many rich visuals. As it is based on mud racing, the concept looks interesting and has been used as a backdrop on an impressive note. The way mud racing happens and how it affects the youth has been etched well. The brother sentiment has been established well in the film.

New actors, Yuvan and Ridha Krishna do well in their respective roles. Though they are new, they showcased decent emotions. The chemistry between Ridhan and Anusha Suresh is also good.

One of the biggest drawbacks of the film is the slow pace. Things take a lot of time to enter the main plot. Though the interval point is highlighted well, things go down in the second half once again.

The emotions showcased in the second half look fake. Also, the logic goes for a toss during this time. Too many elevation scenes for no reason bore the audience. Lack of Telugu nativity is also an issue.

The makers have done a good job with the technical aspects as the production values are top-notch. The camerawork that showcases the races is also impressive. The editing is decent and so was the production design. Coming to the director Pragbhal, he has done an amateurish job with the film. Though his backdrop is good, the narration lacks sheen.

On the whole, Muddy has an interesting premise and all the racing scenes create interest. But the dull narration, slow pace, and lack of proper emotions make this film a below-par watch this weekend.