Review : My Dear Marthandam – Fun here and there 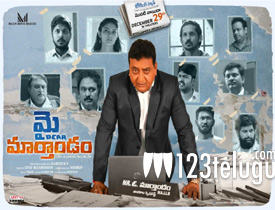 The trailer of 30 years, Prudhvi’s, My dear Marthandam created a decent buzz for the film with some comedy scenes. The courtroom drama has hit the screens today. Let’s see how the film turns out to be.

The film is set in Kovuru of Nellore district where two close friends played by Kalyan and Rakendu Mouli get drunk and accidentally get involved in a murder case. They have no money to hire a big lawyer and are forced to bring in a new lawyer named Marthandam(Prudhvi) who is yet to win a case in his life. Rest of the story is as to how a silly Marthandam who is not serious in life fights the case and frees the two close friends.

The comedy generated through Prudhvi’s character has been written quite well. It evokes decent comedy in the first half and Prudhvi is in his elements with his one-liners and witty satires.

The young heroes played by Kalyan and Rakendu did a decent job in their respective characters. While Kalyan was impressive with his Nellore slang and modulation, Rakendu did his best as the calm going lover who gets restless in the end. Jaya Prakash Reddy was good as the judge and so was Krishna Bhagwan who played a key role.

Even though Tagubothu Ramesh’s role was shortlived, he evoked good laughs as the lawyer who stammers and creates a double meaning effect. Last but not the least, Kalpika Ganesh looked beautiful as the heroine and emoted nicely in the second half. If she gets good roles, she has the talent in her to be a good actress.

One of the basic minus points of the film is that it has no logic for the most part. Being a courtroom drama, things are made to look a bit over the top in the first half with some silly court scenes which are thrown for the sake of commercial aspects.

Apart from this, the twist in the film is quite predictable even though the proceedings get serious in the second half. The plot is old and has nothing new to offer. The way Prudhvi himself investigates the case should have been shown in a more convincing manner.

Production values of the film are just about okay as most of the film happens indoors in just a few locations. The camerawork is neat and so was the editing by Garry B which was crisp. Dialogues need a special mention as they have been written in a funny manner. Music by Pavan is just about okay.

Coming to the director Harish KV, his story idea of creating a courtroom drama through an inexperienced lawyer was good and he managed to get it right in the first half even though he left the logic aside. He extracted good performance from his actors and dealt with the film well to an extent. If he would have made the murder mystery a bit engaging and added some more fun in the second half, the effect would have been even better.

On the whole, My Dear Marthandam is a courtroom drama which has fun here and there. Prudhvi’s histrionics and the funny banter he has with the judge evokes some fun in the first half. But a weak script and predictable proceedings in the second half sidetrack the film. All those who like loud comedy and do not mind the logic can give this film a shot but there is nothing new you will see here.