Review : Nakshatram – Only for some eye candy 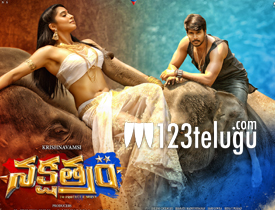 The success of Nakshatram is very crucial for Krishna Vamsi as it will reveal whether the legendary director still has in it to deliver some good films for the audience. After a lot of delays, the film has finally hit the screens today. Let’s see whether Krishna Vamsi makes a comeback or not.

Rama Rao(Sundeep Kishan) is a happy go lucky youth whose only aim is to become a sub inspector. He tries hard but fails every time because of his educational qualification. But when he works hard and gets ready to appear the final test, a road side fight with a drug addict(Tanish) leaves his dream shattered midway.

An upset Rama Rao decides to take on the society himself even without the uniform and this is the time he finds out that there is a criminal set up behind Tanish. How did Rama Rao crack this case? Where do Regina, Pragya and Sai Dharam fit in this setup? To know the answers, you need to watch the film on the big screen.

Nakshatram works well for Sundeep Kishan as he is the best in the film and impresses. The young hero plays his wanna be cop role sincerely and evokes superb emotions. It is only because of him the first half is watchable. Both Pragya and Regina provide enough eye candy as their skin show is on full display and will be a treat for the masses.

Tanish is surprisingly good in his role. Even though he looks young, he means business and does a great job. Nakshatram is a good choice for him as rather than doing some outdated films, he chose to do a negative role and Krishna Vamsi also presented him convincingly.

The first half has some good moments featuring the police set up. Sai Dharam Tej tries to do his best in his badly executed role. As usual, romantic songs have been shot well. Prakash Raj was decent and it was good to see Shivaji Raja in an important role.

Firstly, the film is pathetically long. Every time you feel that the interval or the climax of the film is coming to an end, proceedings are dragged for no extent. It’s simple funda, a cop drama with a crime backdrop cannot be two hours forty-five minutes.

On the other hand, Nakshatram lacks logic in many places. The way Pragya’s role is brought in the proceedings and many other aspects of the film have no logic at all. The second half has many loopholes and the plot looks quite forced. Tej’s role does not bring much depth to the film and is emotionless.

The climax is also stretched to no extent as the film keeps going on for ever. The story line is very old and predictable to the core. Editing is horrible as at least 15 to 20 minutes of the film should have been chopped off.

Music by Bheems Ceciroleo, Hari Gowra, Bharath Madhusudanan is a disaster as not even one song is hummable. Adding to this, the background score is so loud that it can give you head aches in many areas. Production values are decent and so was the art direction. The camera work is strictly okay and is surely not of Krishna Vamsi’s standards. Lyrics were okay and so was the entire set up.

Coming to the director Krishna Vamsi, his story idea is good but his execution was seriously below par. He should blame himself for unnecessarily adding a lot of run time and narrating the film on a bland note. He starts the film nicely through Sundeep Kishan’s role and brings in the interval bang also well. But it is the second half where things go haywire as the film side tracks and falls flat on its face.

On the whole, Nakshatram is a very routine and outdated cop drama which you might have seen many a time in the past. Sundeep Kishan and Tanish elevate the proceedings through their performances but the script and narration disappoint you to an extent. All those who are hell bent on watching a Krishna Vamsi film and are expecting some good eye candy, this film has that in abundance and ends as a below average watch this weekend.