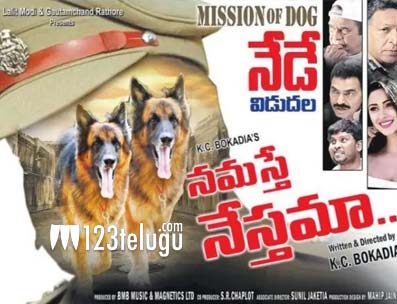 Veteran Bollywood producer and director, KC Bokadia has made a Telugu film called Namaste Nesthama which has hit the screens today. The film has Sriram and Eeshanya as the main leads and let’s now see how it turns out to be.

Santosh (Sriram) is a sincere police officer who adopts a puppy (Rockey) and trains it to become a smart police dog. But as Santosh has problems with a local politician (Sayaji Shinde), he gets killed all of a sudden in a gang war and things become chaotic. The rest of the story is as to how Rocky takes revenge on the murderers of Santosh.

Sriram is impressive as a cop. Though he has limited screen presence, he did well in his role. All his scenes with his wife played by Eeshanya are good and they share good chemistry. Talking about the heroine, Eeshanya looks beautiful and did her wife’s role in an impressive manner. She was good at all the emotional scenes.

Nasser did his supporting role of a cop quite well. Tagubothu Ramesh gets a big role and he was impressive in it. It was good to see Brahmanandam after a long time but his comedy was routine. Some sentimental scenes when Sriram gets killed have come out well.

KC Bokadia is a person from the late ’80s and he has introduced stars like Salman Khan. It is hard to understand why he has made a film in the south. The subject chosen, narration and proceedings are very old school and remind you of the good old days of the ’80s where such sentiments used to work.

A dog taking revenge on his master’s death, it chasing down the villains and killing them has been showcased in so many movies. The logic goes for a big toss in the film as a famous MLA gets scared of a dog just like that. It moves freely and attacks all his goons at will. Some sense should have prevailed to show such scenes in a decent manner. The story of the film is ages old and you can easily understand what is going to happen next in the film.
Technical Aspects:

The production values of the film are also very old school and nothing great. Music is decent and so was the background score. The camera work is decent and so the production design. Dialogues are neat. Editing is bad in the first half as too much time is taken to enter the main plot. Coming to the director KC Bokadia, his narration is dull and does not give you any excitement. Though there a few scenes which click but the rest of the film is very disappointing and bores the audience.

On the whole, Namaste Nesthama is a very old school revenge drama that has nothing going it’s way. The narration, scenes, and plot are quite outdated and will not click with today’s audience at all. Except for a few emotional scenes, this film puts you off in many areas and ends as a painfull watch this weekend.