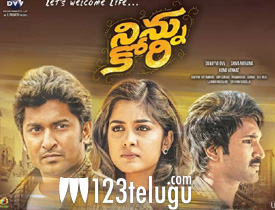 Natural star Nani, is on an all time career high and is back with a love entertainer called Ninnu Kori. Directed by debutante Shiva Nirvana, this film has hit the screens today. Let’s see how it is.

Uma(Nani) is a PHD student in Vizag who falls in love with Pallavi(Nivetha Thomas). As time passes by, Pallavi too accepts Uma’s love and them as a mature couple decide to only marry each other when Uma settles down in his career.

But the twist in the tale arises when Pallavi’s dad(Murali Sharma) suddenly fixes Pallavi’s wedding with Arun(Aadi). Left with no choice, both Uma and Pallavi are forced to break up and Pallavi marries Arun.

What will Uma do now? Will he try to win his love all over again? Will he be successful in his love life? That forms the rest of the story?

With every film of his, Nani is growing by leaps and bounds. Ninnu Kori showcases the natural star in full swing as he gives a settled performance. He is full of fun as a lover boy and evokes superb emotions during the second half. The basic pain, the setback he receives and the way he fixes things in the end, all these aspects have been showcased wonderfully by him.

Nivetha Thomas also gives a spellbinding performance as Pallavi. No other actress could have pulled off a role like this. Her chemistry with Nani is quite good and gives super depth to the proceedings. Aadi is also good in his supporting role. He has equal importance in the film and showcases wonderful maturity throughout the film.

Murali Sharma is superb and his comedy angle with comedian Prudhvi and Nani in the second half is hilarious. The jokes featuring the NRI culture have been executed quite well. There is an underlying message in the film as the audience will surely connect to the proceedings with their loves at some point or the other in the film.

Even though the film ends well, there is not much depth in the proceedings. Some more drama should have been induced in the climax especially through Nani’s role.

Ninnu Kori is an out and out a class film and there is absolutely nothing for the mass audience. So, all those who are expecting some crazy commercial elements like Nani’s previous films might be disappointed.

The film has similarities to many Bollywood films as the director has cleverly used points from many Hindi hits in the past.

Camera work by Karthick Ghattamaneni is one of the biggest assets of the film. His photography enlightens the proceedings and gives this romantic entertainer a class touch. The way Karthick has lighted certain scenes and showcased the US backdrop is just amazing. Music by Gopi Sundar is awesome as all the songs are hummable.

Coming to the director Shiva Nirvana, he makes an impressive debut. The way he has handled the emotions throughout the film is pretty interesting. His screenplay is quite gripping as he narrated the film with a lot of conviction. The way he has given importance to the institution of marriage is very good. If he had handled the climax a bit more sensibly without hurrying things, the output would have been even better.

On the whole, Ninnu Kori is a very heartwarming love story which is filled with beautiful moments throughout. What’s clicks with the film is contemporary story line which is set well in today’s time and age. Superb performances by the lead cast, amazing romance and entertaining moments are big assets for this film. However, the climax is a bit mature and may not go well with regular film lovers and mass audience. The film will do exceptionally well in the A centers and overseas but not with B and C centers. If you ignore a bit slow narration, this film ends up as a very entertaining watch with your entire family this weekend.