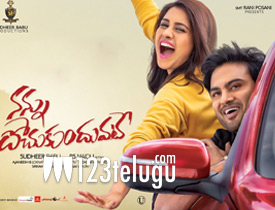 For the first time in his career, Sudheer Babu has turned producer with Nannu Dochukunduvate which has hit the screens today. Let’s see how it is.

Karthik(Sudheer Babu) is a man of few words and his only goal is to settle in the US. As time passes by, Karthik’s dad(Nasser)fixes his match with one of his relatives. To escape the situation, Karthik tells his father that he is already in love with a girl named Siri.

Left with no choice, Karthik ropes in a short film actress Meghana(Nabha Natesh) to act as his lover for a few days. As expected, sparks fly and the couple starts liking each other but does not disclose their feelings. Rest of the story is as to how the couple finally realizes their feelings and get reunited.

Sudheer Babu has improved a lot when compared to his previous films. He looks perfect as a man with few words and does his role sincerely. His performance in all the breakup scenes is very good and brings depth to the proceedings.

Nannu Dochukunduvate completely belongs to Nabha Natesh as she makes a striking debut. She is the life and soul of the film as Nabha breathes life into the role of Meghana. The way she performs her chirpy character make many dull scenes look quite interesting. She has the acting talent and will go a long way in Tollywood if chosen her roles well.

Nasser is perfect in his father’s role as all his scenes with heroine Nabha have been executed well. Even though the plot looks predictable, the way the director has narrated the romantic track looks convincing. Anchor Varshini gets a decent role and she impresses in her part. The comedy scenes showcased around the short film culture evokes a few good laughs in the first half.

After starting the film on an impressive note, the director loses out on ideas during the last fifteen minutes of the first half. The way the lead pair break up is not convincing as a stronger interval bang should have been planned to make things better.

The father-son relationship should have been shown in an even better note. As in all love stories the proceedings are a bit slow and quite predictable as you exactly know what is going to happen next.

Sudheer Babu’s production values are top notch as the film looks rich in every scene. Things become even more exciting as the office set up and the village visuals have been showcased richly. Dialogues for this love story are good and so were the lyrics. Music wise there are not many hit songs but the background score is quite good and elevated the love story well.

Coming to the director RS Naidu, he makes an impressive debut. His talent is proved when he takes a very predictable love story and narrates it on a breezy note. If he would have made the proceedings a bit crispier and engaged the audience with a good conflict point, things would have been even better.

On the whole, Nannu Dochukunduvate is a typical romantic comedy which is narrated on a simple and entertaining note. Debutante Nabha Natesh leads from the front and wins you over with her standout performance. The film is aimed at the multiplex audience and not for the BC Centers who expect popcorn entertainment. If you ignore the slightly slower pace and predictable nature of the proceedings, this film makes up for a breezy watch this weekend. Go for it.