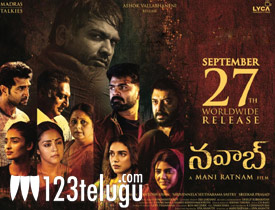 Mani Ratnam’s Chekka Chivantha Vaanam, which has been dubbed in Telugu as Nawab has hit the screens today. Let’s check whether Mani Ratnam’s work impresses us or not.

The film takes off with the murder attempt on Bhupathi Reddy (Prakash Raj), a well-established don in Chennai. In order to find the person behind it, his three sons, Varadha(Arvind Swamy), Thyagu (Arun Vijay) and Rudra (Simbu) attack Chinnappa who is a member of the opposite gang. As time passes by, the brothers come to know a shocking truth about the murder attempt on their dad. Who is that culprit? Why did he attack Bhupathi Reddy? To know this, you have to catch the film in theaters near you.

Mani Ratnam, who is known for making movies with a huge star cast has once again made a film with all the noted artists. Starting with Prakash Raj, the award-winning actor lives in his role of an aging don. Arvind Swamy fits perfectly into the role of an aggressive and short-tempered person and his thread with Aditi Rao is good. Arun Vijay as the second son is apt in his role as the business-minded guy.

Coming to Simbu, he nailed it as Rudra, the third son. His stylish looks, short and crisp dialogues are an added advantage for the film. Not to forget, Vijay Sethupathi, he is the surprise package and plays a key role with aplomb. His performance is too good and all his innocent dialogues evoke good laughs in the film. Special mention to the person who dubbed for Sethupathi. His voice suited the star hero quite well.

Jyothika gets a respectful role in which she impressed with her natural acting. Senior actress, Jayasudha did justice to her mother’s role. Young starlet Aishwarya Rajesh as Arun Vijay’s wife is good. Aditi Rao Hydari and Dayana Erappa did a decent job in their limited screen presence. The climax twist where the entire suspense drama is unveiled looks top notch.

Like many of Mani Ratnam’s earlier films, this flick also runs on a slow pace which can be termed as one of the minuses of the film. Though the first half has decent family emotions, the latter half mostly runs on the revenge genre which may not go well with all sections of the audience.

As the basic plotline of the film is serious, there is no scope to insert Mani Ratnam mark romantic scenes which is a big disappointment for his fans. There was a lot of scope to create breathtaking action episodes in this revenge gangster drama but Mani wrapped up things on a simple note without any authentic action blocks.

Music by AR Rahman is a major boost as his engaging background score carries the film’s mood well till the last minute. Cinematography by Santosh Sivan is brilliant as he kept every frame beautiful and natural. Editing by A. Sreekar Prasad is good as he trimmed the proceedings and kept a reasonable runtime. Production values for this Mani Ratnam production are decent. Though Mani Ratnam has established his characters well, his narration lacks the punch in the second half.

On the whole, Nawab is a below average gangster drama which has a few engaging moments. Things look good in the first half but the latter part runs on a flat note until the climax. This film is not for all and will impress staunch Mani Ratnam fans because of the strong characterizations. Cashing in on the craze, this film may work at TN box office but it will have a limited appeal here in Telugu.