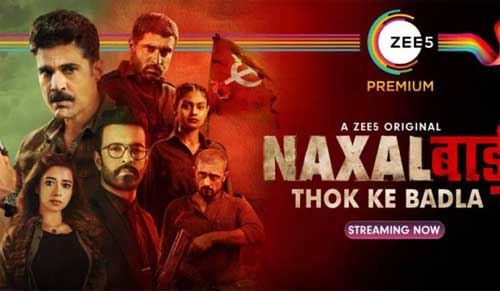 So, continuing the series of reviewing movies and shows, our today’s pick is Naxalbari, the Hindi web series in Hindi. Starring Rajeev Khandelwal, the series is available on Zee 5. Let’s see how it is.

The series is set in the Naxal based area of Gadchiroli area in Maharastra. Special Task Force Officer Raghav Joshi (Rajeev Khandelwal) is appointed in that area to end the Naxalism and bring peace. At the same time, Ambar Keswani(Aamir Ali) is planning a mining project in that area. He wants to eliminate the Naxals and start his empire. A twist of events takes place and Raghav comes to know that a big political connection is behind the Naxals and mining project. What is it? and how does he solve it forms the rest of the story.

Rajeev Khandelwal is superb in his role as a cop. After a long gap, he got a meaty role and he showcases what he is capable of. The manner in which he showcases his angst and deals with the emotional scenes was good to see. But the surprise package of the show was the handsome actor Aamir Ali who plays this indutrialist. He is menacing and has solid screen space. Aamir delivers the knockout punch and gives a lot of depth to the show.

The manner in which characters and their stories are established looks good in the series. The manner in which the corporate houses and industrialists are looting the country is shown so well. The dialogues are earthy and so was the BGM of the show. Production values are also good.

There is nothing new in the storyline as such subjects have been showcased many times earlier. But here, the only difference here is that the problems are shown in detail. Though all this is done, the wow factor is missing in the show. There are no hard-hitting scenes that will shock you or the drama keeps you on your toes.

The scenes are good but they are also highly predictable which is a big disadvantage. The pain is not brought out well in the series and that is the biggest drawback in the show. There are not many scenes that will move you or making things emotional. The series is narrated on a simple note without much effect.

On the whole, Naxalbari is a realistic drama based on the plight of Naxalites. How they suffer due to the wrongdoing of political leaders is showcased well. But the predictable story and needed drama play a spoilsport a bit. Give this series a shot for the honest performances from the lead cast.